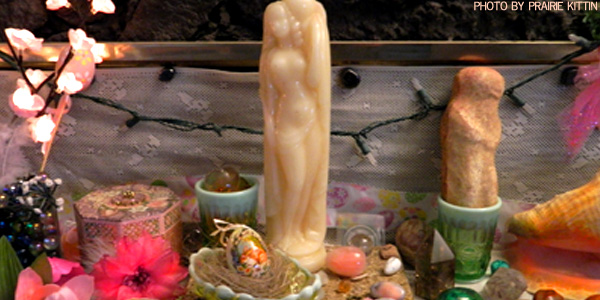 Ostara, Then and Now

Pagans are big on history and gleaning the ancient origins and practices of our holidays is akin to sifting through piles of sand to find the handful of diamond flecks that might be scattered within. Much of our “history” actually comes from inferences derived from literature and the smattering of observational accounts that managed to survive thousands of years of war and the overt pissiness of nations. It becomes the odious task of modern day readers and scholars to sort out what happened from what we think happened or what we hoped happened during these celebrations of old. So here we go…

The word “equinox” finds its roots in Latin and means “equal night,” referring to the balance between light and dark in the cycle of the year. Winter Solstice brings the longest night and at Summer Solstice, we have the longest day. Ostara or “Spring Equinox” is one of the two mid-points between each of these two extremes creating a perfect balance between the two. During the Spring and Autumnal Equinoxes, the Northern and Southern hemispheres share the same experience of light and dark. At all other times, they provide the yin to the other half’s yang, balancing out the light above with the dark below or vice versa. Around March 21, the Sun crosses the equator separating the two hemispheres, providing twelve hours of daylight and twelve hours of night. I feel as though the Animaniacs should have a song about this [blogger scribbles note].

In the Temporum Ratione or The Reckoning of Time by the Northumbrian monk, The Venerable Bede (673-735), the scholar and historian attributes the origin of the word “Ostara” to “Eostre,” a Germanic goddess of spring called “The Radiant Dawn.” The word “Easter” is also thought to derive from “Eostre.” In Deutsche Mythologie (Teutonic Mythology), a seminal treatise on Germanic mythology (1835), Jacob Grimm also proposes that the Anglo-Saxon name of “Eostre” comes from the Old High German adverb “ostar,” which expresses movement toward the rising Sun. He says. “Ostara, Eostre seems therefore to have been a divinity of the radiant dawn, of upspringing light, a spectacle that brings joy and blessing, whose meaning could be easily adapted to the resurrection-day of the Christian’s God.” Since the Spring Equinox is, from a flowery standpoint, the “dawn” of the light and active part of the year, it seems fitting that a Goddess known as The Radiant Dawn should be its ambassadress.

The Germanic cultures celebrated the feast of Ostara on the Full Moon following the Spring Equinox, which is almost identical to the celebration of the Christian holiday of Easter. During this time, the earliest agricultural societies would celebrate their planting season and bless the new crop. The association of the Vernal Equinox with fertility goddesses leads to the traditional folk name of “Lady Day” for Ostara. 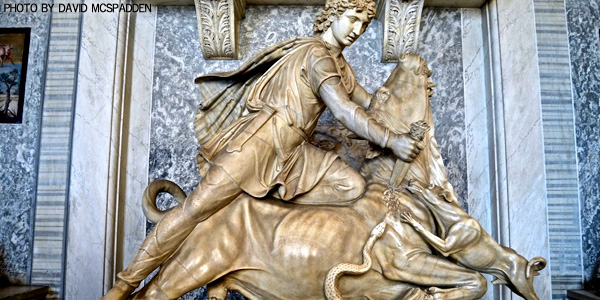 Mithras, starting some crap with a bull, assisted by a snake and a cow-blood thirsty dog.

Ancient Romans held sacred the story of Mithras, who was born on the Winter Solstice and died and resurrected on the Spring Equinox. Mithras rewarded his loyal followers by helping them to ascend to the realm of light after they died (and apparently had an issue with cattle). In another story from ancient Rome, Cybele was a goddess whose consort, Attis, was born of a virgin birth. He also died and was resurrected at Spring Equinox.

The Christian Bible shares the story of Jesus Christ whose birth is celebrated on December 25, 4 days after the Winter Equinox, and who rose from the dead in the Spring on Easter. This is quite thematic.

The Iroquois in America used the equinox to perform fertility rites to bless the coming harvest, including a corn dance that was considered essential for a successful harvest. Ceremonial corn was mixed with the seeds for planting, which was considered to be a blessing for its growth. 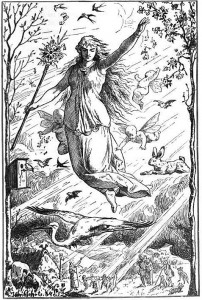 “Ostara” by Johannes Gehrts. Not a dead cow in sight.

In modern Paganism, Ostara/Spring Equinox is a time to celebrate new beginnings and the return of warmth to the land. The promise of warmer weather that still lay in the womb of the Earth Mother at Imbolc now births to the surface and in much of the world, we see tiny plants reaching for the sun, showing us their confident assurance that the cold of winter is over and it is safe to come out. We use the solstices and equinoxes as cross-quarters to the major sabbats of Imbolc, Beltane, Lammas, and Samhain, so there is often a focus on the balance between or dominance of light and dark in these celebrations. Eggs may play a part in ritual, honoring the female life force that will seek fertilization at Beltane.

“Spring Cleaning” is a tradition when weather becomes predictably warm and days are longer. This also reflects a desire for new beginnings and a “clean slate” preparation for the active part of the year that dawns with Ostara and will ends Samhain. Not only should we physically clean and organize our surroundings, but we should also to smudge out our home to make certain that any energies that stagnated over the winter months are cleared out and empowered with positive juju. Wake up, wake up, wake up your sacred space and bring it back from the slumber of dark and Winter.

In CUSP (Climbing Up the Spiral Pathway), Ostara begins our active part of the year when we “plant” our goals for the coming harvest and start the process of manifesting them in our lives, both magically and mundanely. We often plant beans in a peat pot of potting soil to symbolize our goals and nurture them carefully. How the bean seeds grow acts as an oracle for how our harvest goals will manifest. If one bean takes longer to sprout than another, we know that particular goal may take longer to manifest. If one bean flourishes and another is smaller and more fragile, we know which of our goals needs greater care and attention.

Likewise, we begin the mundane activities that will bring our goals to fruition. If we planted a new job, starting at Ostara, we review and optimize our resume, evaluate the current market for the job we seek, and start any necessary training that could make us more marketable in that field. We lay the groundwork to compliment our year’s magical efforts. As above, so below.