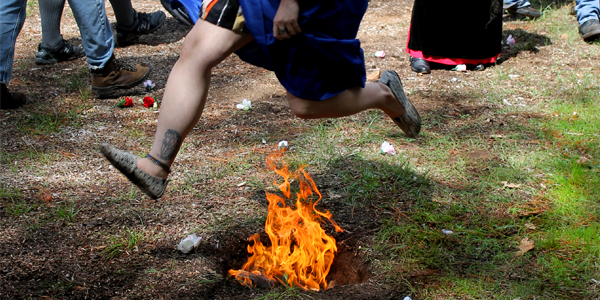 Beltane Then and Now

The word “Beltane” comes from the Irish Gaelic word “Bealtaine” and in the Common Celtic language means “bright fire.” “Bel,” the root word, comes from “bale” which means “white” or “shining.” “Tene” means “fire.” The traditional astrological date for Beltane is the midpoint of the Sun’s movement between Ostara/Spring Equinox and Litha/Summer Solstice. This generally occurs between May 5 – May 7; however, the common celebration time is May 1. In Celtic mythology, Beltane marked the beginning of summer and of the light half of the year, which is why the Summer Solstice is referred to as “Midsummer.” Great bonfires (balefires), lit for purification and transitioning the year from dark to light, were the centerpieces of celebrations. Villagers drove herds of cattle between the fires to purify them for the year and ensure their safety and fertility. Ashes from the balefires joined the ashes of the Yule log and were spread through the fields to bless the coming harvest. In Wales, it was customary to place a bit of the balefire ashes in one’s shoe for good luck. The hearth fire, which has burned through the winter, was extinguished at this time, officially welcoming summer. Beltane is the counterpart to Samhain and together they mark the beginning of summer and winter respectively according to the old Celtic calendar. For some ancient Europeans who were involved with animal husbandry as well as agriculture, this festival heralded in the pastoral growing season.

Original maypoles consisted of newly budding branches suspended from a tall pole. Young people grasped the branches and danced around the pole to celebrate new life. Later, the branches were replaced with brightly colored ribbons which were a powerful talisman in the Roman culture and served as protection for the crops that brought the coming harvest.

In Italy, the maypole was greased and topped with a wreath bearing a crown. Competitors tried to climb the pole to claim the crown. Southern Europeans celebrated by tying brightly colored ribbons around flowering tree branches. The Romans commemorated Flora, the Goddess of Spring, at this time and decorated themselves and their animals with flower garlands to garner Her blessings.

As a celebration of fertility, Beltane coupling rites energized the coming harvest. Pairings at this time were often outside of marriage or commitment and the excitement of new seduction and unfamiliar joining fueled the energy sent toward the blessings of fertility of the crops. Beltane was an unlucky time to marry because it was a time of non-commitment rather than solid relationships. Children conceived during these spiritual acts were particularly blessed and often received names of a divine nature.

In the Christian faith, May Day is dedicated to Mary, the mother of Jesus. Schoolchildren, adorned with flowers, formed a processional through the streets singing hymns. A teenage girl, chosen as May Queen, wore a bridal gown and ended the procession by placing a wreath of flowers onto the head of a stature of Mary. Young girls hung small bags or baskets with flowers, treats, or other gifts on the doorknobs of homes, then knocked and ran away.

Beltane in our time is celebrated in a variety of ways by different spiritual paths.  The theme usually remains that of fertility and the joining of opposites. Colors used for maypole ribbons are often red and white, symbolizing the blood of the Maiden and the seed of the Creator aspect of the Young God as their consummation conceives the harvest of the year. This symbolic pregnancy transitions the Creator to the Protector and the Maiden to the Mother, representing the seeds that grow in the nurturing soil of the earth until they are birthed or harvested in the fall.

Fire endures as a strong component of Beltane celebrations and many celebrants will “jump the fire” to purge away that which does not serve to enter cleanly into the rest of the year. Fire jumping builds energy levels within a ritual structure with these increased energies released at a particularly poignant moment of the ritual to go toward the support of a group goal.

Beltane is, above all, the joining of opposites; the union of male and female. It celebrates of the perfect complement of yin and yang, dark and light, earth and sky, working together toward the fulfillment of a new life. At Beltane, the days are warm and the nights are cold, which furthers the theme of the blending of opposites.

This sacred duality also honors the union of Heaven and Earth, of humans and their deities. It reminds us of the magical combustion that happens when a person acts in accord with the Universe to create his or her own greatest good. Working in harmony with the natural flow of one’s life and following the guidance of Divinity is one of the most delightful and productive experiences a human can experience. It is not always pretty or easy, but when you collapse yourself into Divine intent and build your life around the flow of universal energy rather than fighting against it, fantastic things happen.

The dynamic marriage of our own actions with the blessings and intention of God and Goddess is great cause for celebration. When the weather warms and we feel the promise of gentler days, there is no better time.

Like what you’re reading? You can find more of Katrina Rasbold’s work on her Amazon.com page by clicking here.