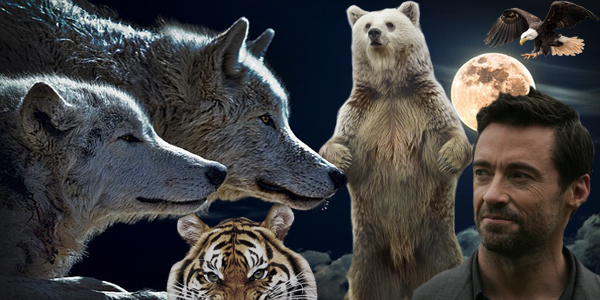 My experience with totem animals is shaky at best. I do not have a particular animal with which I feel a particularly strong alliance, although I had an affection for pigs for awhile, especially those with character. I spend time with Dragons, who are my magical allies, but I could not rightfully call them “totem” animals with a straight face without risking my house burning down. I have friends who are soulfully in tune with cats, dogs, or horses. Some have extreme devotion because they are so dissatisfied with humans they have shunned us in favor of their four-legged friends. I adore cats, but I always end up the ones that use you as a hotel, feed station, scratching post, and catnip connection. That does not inspire sacredness for me, although I deeply grieve when they pass on. I tend to distrust animals and refuse to have pets I cannot take in a fight, regardless of how much I love them. You never know when an animal is going to snap.

Horses, wolves, bears, large black dogs, monkeys, the mighty buffalo, the stag, snakes, eagles, tigers… so many animals represent majesty, strength, protection, fun, and wisdom. I believe a person’s totem animal chooses them rather than the other way around. It comes to you while visioning or spirit walking and over time, sends you vital connections via pictures, real-world sightings, through poetry, stories, or other media. These animals move a person in some particular way that defies the separation of the species. It is an energy transference between two living beings that cannot be contained to expression through language. With this animal, you feel a connection of the soul and enjoy interaction beyond what would normally exist between humans and beasts. Your totem animal finds you, speaks to you, and runs through your subconscious like the soundtrack to your life. It chooses you and in some ways, it owns a part of you and you of it. So far, this experience has eluded me.

Years ago, I was chatting with my coven gals after ritual and the dreaded subject arose. I listened with interest as they each reverently spoke of their totem animals and their experiences with the animals that chose them, but inevitably, my mind began to wander through mixed feelings brewing inside me. I considered the exploratory and experiential nature of magic and how specific the totem animal process seems to be. Spirit or totem animals often fall predictably into the those noble species mentioned in the previous paragraph. Occasionally, we get a rogue magical friend who aligns with a hippo or a giraffe, but how many are called to spiritual congress by the powerful kangaroo or the fierce wolverine? The healing leach or the sanguine Idaho whistle pig?

I was so lost in thought that I failed to notice the lull that fell into the conversation when all of my precious girls turned to me in unison. Was it my sovereign, commanding leadership presence that led them to wait for my contribution to the conversation or did I have a constipated look on my face forged by deep thought? Was it because a few weeks before, I mentioned to them that when a conversation hits a natural lull, it is usually twenty minutes before or twenty minutes after the hour? I would look at my watch and yes, it was 9:40 PM.

“So what is YOUR totem animal, Katrina?”

I gave them my best High Priestessy look. Those of you who lead groups know this one. It is what Joey Tribiani from “Friends” calls the “smell a fart” look. You pause, look thoughtful, and choose your next words carefully. These words will usually be along the lines of, “What an insightful question. I will need to meditate on it and get back to you,” which is High Priestess code for “Pfft, I dunno, let me research it.” This time, I pushed aside the instinct to react like a deer trapped in headlights and instead, reached up to touch the Goddess. She smiled back at me with that arched eyebrow that tells me She is about to bust a move of legendary proportions. Her blessings poured over me and I felt the power rise up within. She said I should not fear such things as species bias and status quo and challenged me to boldly break through the imposed “that’s just how it is” glass ceiling to claim my own place in the sacred totem animal dyad. She demanded from me no less than the complete redefinition of how Pagans approach the idea of the totem animal. In that moment, I was called upon for no less than to blaze a new trail in magical canon and rewrite the rules. BLESSED WAS I AMONGST ALL WOMEN!

They blinked at me with horror and one of them, Goddess bless her little soul, said those sweet newbie words that melt the heart of any Pagan leader, “You can’t do that.”

“Darling, I just did,” I answered. “I am a Priestess of the Goddess and I can do whatever I want as it harms none and this definitely harms none. Hugh comes to me in times of distress and I think, ‘What would the Wolverine do?’ He visits me in dream time and vision time and our spirits soar together. I am mesmerized by how he moves, his mating habits, and the sound of his roar. He represents fierce, clever, animal strength and has a glint of the God in his eye. He is mine. I have claimed him in the name of the Goddess as my totem animal. Plus, I think I could take him in a fight and I fully welcome him to prove otherwise…oh and so mote it be.”

I guess the twenty after and twenty  ’til rule only works sometimes.