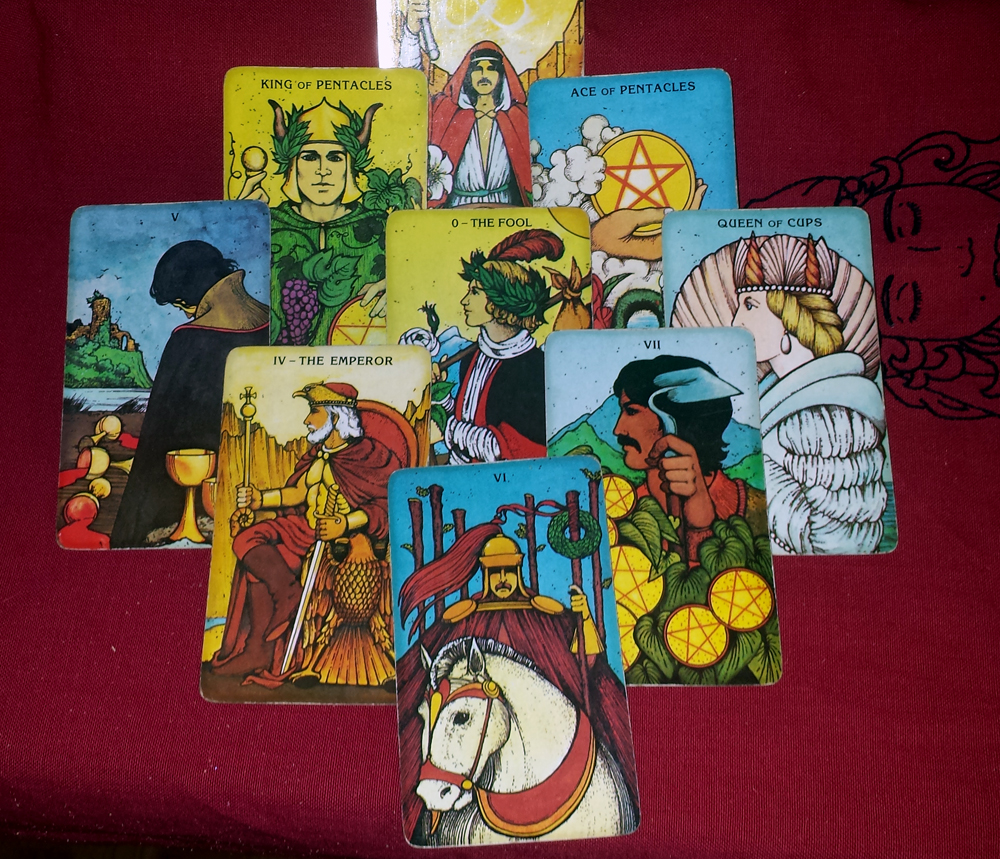 As 2014 comes to a close, I thought it would be nice to check into the energy that 2015 brings to us. Here is an overall, general reading asking the question What energy will the year 2015 bring to us?

The heart of our reading is a glorious card, “The Fool.” This tells us that the heart of the year will be about new beginnings,  a sense of innocence reborn, and a profound leap of faith. Because 2013 and 2014 left many of us with little to lose, our load is now lightened and we can approach the new year unencumbered by many of the obstacles that held us back in previous times. When the world reshapes around us, it can be a terrifying experience and it is easy to see things as being done *to* us rather than *for* us. Often, before The Universe begins to willfully reshape our lives, we are given months or even years of nudges, alerting us to changes we should make. When we resist those hunches, The Universe takes hold and begins the process of change with or without our consent. When we resist the changes that come, we often feel oppressed and persecuted. It is not usually within our scope of vision to see the long-term outcome of changes that are imposed upon us, so we tend toward presuming the worst. This creates fear and causes us to fight harder against the shifts we experience. When we live our lives with a profound sense of faith, trusting in “the process” and in the ultimate greatest good, we are able to trust beyond the apparent breakdown of what is familiar and common to us (even if it is unhealthy) and to believe that we will ultimately end up in a much better place.

The past two years have left many of us in a place of deconstruction and adjustment. It is as though all that was old and outmoded was cleared away and the land salted to rebuild something new and better. The Fool at the heart of the reading speaks to this time of entering into a new chapter of our life with tremendous confidence and assurance that when we step off of the cliff, we will fly rather than dash against the rocks below.  The Fool’s bright red plume shows his passion for life. The laurel wreaths surrounding his head show is belief in ultimate victory and the white rose in front of him is his purity of thought and intent. We must move forward into the year with confidence and a completely pure heart, free of malice, fear, guilt, or blame. Do not carry the baggage of the old chapter into the new one.

At the top of the reading (with the title cut off) is The Magician. He has one hand raised up to the heavens and the other pointing down to the earth. On the table before him (under The Fool’s head) is laid out a cup, a pentacle, a rod/wand, and a sword. This tells us that he has command of all of the suits of the Tarot, which represent the emotions, security, energy, and obstacles.  The red that illustrated The Fool’s jaunty feather falls over The Magician in a long cloak and the white that was represented by The Fool’s rose is The Magician’s inner robe. He is now clothed in purity of intent and cloaked in tremendous passion for life. His raised hand takes the power of heaven and his lowered hand gives that power manifestation on earth. In between the energy of heaven and its manifestation on earth is the person, the magician…you. You have the ability to take the will and power of heaven and give it form here on earth.  The infinity sign over his head shows the constant flow of this energy between heaven and earth. Because we are all vessels for the will of The Universe and ultimate greatest good to manifest, it is essential that we keep ourselves clothed in pure intent and passionate, vivacious love for life. Therein, we are given ultimate control over our emotions, our own security, our energy, and the obstacles before us.

Also, The Magician is the first card of the Major Arcana of the Tarot – which is a special set of twenty-two cards within the seventy-eight card deck that deal with the matters of higher spirit rather than the mundane events in our lives. By The Magician following The Fool, we have a natural progression from zero to one, which reminds us that things are unfolding exactly as they should.

The next row shows us the King of Pentacles and the Ace of Pentacles. Both of these are money and prosperity cards and we see them as a progression out of The Magician card. This tells us that many of us will be manifesting new income streams in the coming year and will find success in those venues. Because the flow comes from The Magician, there will be an emphasis on what we can create and do with our hands and the successful marketing of our own gifts, talents, and skills. The global movement will be away from the movement of imaginary money around on paper and pixels to the usefulness of what we can provide to the world and its people in the form of useful services, products, and entertainment.

The middle row of the reading, to the left and right of the heart of the reading, shows yet another progression from the 5 of Cups to the Queen of Cups, which is a huge jump in chronological sequence. This shows rapid emotional growth, but one that must be taken in direct consideration to the positioning within the reading.

The 5 of Cups gives us a very human response to mourn what we have lost. The figure in the image focuses on all that has spilled without looking at the full cups that remain behind. Rather than the optimistic white and red we saw in The Magician and The Fool, this figure is clothed in brown and black, which is far more somber. There is a thread of red running through the cloak, so all passion has not yet died. The astute eye also notices that the liquid that spills from the cups is also red, possibly blood, and so the person in the card is mourning not only what they actually lost in the past, but also a good bit of their own passion and their life’s blood. They likely feel that they are no longer themselves anymore and that they have given up too much; lost too much.  This is not only a card of regret and self-pity, but also of the human need for us to acknowledge when we have lost and to go through the normal process of mourning. As The Fool told us, when we are stripped of what we know and what is familiar to us, we mourn our loss even if what we lost was not good for us. It is essential that we honor what we feel in order to effectively move forward.

The Fool falls next in the reading (although we read the heart of the reading as the first card to give us the focus for the reading) and it tells us that even though we must take time to mourn, we must not live there. We must mourn and then move forward, taking our lighter bundle and stepping into our own future.

The next card is the Queen of Cups, who is compassionate, wise, and emotionally stable. She holds a full cup in her hands and knows how to use its contents effectively. Cups rule over emotion, intuition, releasing, and healing. She gives us the strength to incorporate our loss into the construct of who we are to become as more fully actualized people.

This row tells us that 2015 is a year of moving on and of resolution. It is about growing, becoming, and developing.

The next row of cards brings us to The Emperor and the 7 of Pentacles. This is a very encouraging outcropping of the previous row. The Emperor is all about will power and the appropriate use of force. This card in this particular position gives us the gift of knowing when to apply pressure and when to move forward. Again, the figure is clothed in red, but the purity of white is now all around his face, reflected in his beard and hair. This means we must bring our purity into all thought and all intent. His chest and arms are golden, which shows we must value tremendously what we hold in our hearts and in our guts. His lap is again draped in red to allow our physical and sexual passions to have honor and integrity. His sword is grounded, which means he perceives no threat, but his gaze is steady. He looks others directly in the eye, so his purity of intent and thought translates out to tremendous honesty and forthrightness. The Emperor tells us that we have the will and the wisdom to rule our own lives with honor and dignity. You can look at this man and tell he does not take shit off of anyone. Nor should we.

The next card is the 7 of Pentacles and this gives a position of safety from which we can reflect on how far we have come and how hard we have worked to get to where we are. This card is tremendous growth from the longing of the 5 of Cups in the previous row. Now, we look back contented over what we have created and we bless all that brought us to this place, by our own hands and by the grace of heaven. This man is working in a garden and the plants are rich and lush with great promise of an abundant harvest. The man stops working and leans on his hoe to look at the row behind him. It is straight, without weeds, and healthy. He has done well.

The final card and our ultimate outcome for 2014 is the 6 of Rods, which is the card of ultimate victory.  This warrior rides back from battle on his white horse, wrapped in red. He carries the complete laurel wreath showing that what was merely “in the head” of The Fool is now a reality. He has won the war and returns victorious.