The Queen is Back

It has been a while, but I was busy writing another book and getting ready to write a couple more.  How to Be a Queen has published on Amazon for those of you who do not yet know how to be royal and all.  It tells you how to get control of your life and rock that tiara all the way to Valhalla, babe.

I excitedly began research on the new “Seven Sisters of Avalon” book, which is called Aster of Avalon.  I had a real debate as to which sister to write about next and they all have such great stories unfolding.  Aster, as those of you who read Rose of Avalon know, is the ass-kicking, gender-bending, warrior priestess princess.  She will travel to Rheged and kick some ass on the Saxons, fight in the thick of the Celts, and get mixed up with King Uriens the Bold and his sons, including Owain the Fierce, who has a fabulous secret that Aster uncovers.

But then, Aster has a secret of her own and when it comes out, these alpha male Celts find out something new about the hard core warrior they so greatly admire.

It should be fun to write, plus a challenge because Aster’s personality is leagues away from mine.  Rose was a little more like me, so she was a breeze.  Ophelia and Lilian were a lot like me as well.  Aster, however, could not be more different, so it will be an interesting task to craft her and her story.

By the end of August, I will have completed and released The General Hospital Fan Club Weekend Yearbook – 2014, barring any catastrophes.  I expect Aster to be finished by Fall.

I have also been hard at work making Doctor Who Weeping Angels from hacked up fake Barbie dolls.  It’s slow going because the metamorphosis is quite a process.  Here are the first prototype girls in their current state: 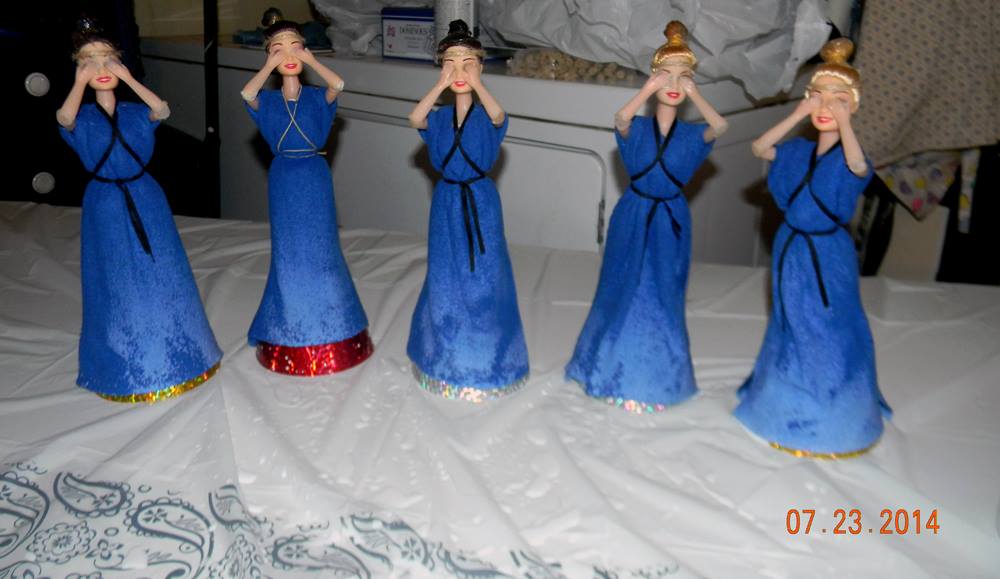 They should be ready by the middle of next week.  This stage went so well that I will be investing in a few more dolls to mangle.

That is what I have been up to in my absence!  Kiddies go back to school in a week and Aiden (my grandson, 10) starts up a week after that.  The summer just flew by!

I hope all of you are seeing your “crops in the field” and getting an idea of how your Harvest will manifest.  Mine is … well, not quite what I expected, but it is as She leads, right?  I am working hard to stay open and receptive, to move when She tells me to move and to wait when She tells me to wait.  I don’t have to know what it looks like on the other side in order to get moving when I feel the shove on my back.

This year, I just don’t even have a clue where it will all end up.