Most of you are not even on this scale at all and I love ya for it.

I understand that not everyone is religious or spiritual, which I consider to be two very different things that are only related to one another in a minor way. I get that. I just wish it was not such a struggle for people to let others believe differently than they do without being assholes about it.

Certainly, people go about their lives in different ways in the world and some of those ways will always be offensive to other people. You just can’t avoid a misstep here and there, but do people have to actually, actively go out of their way to be offensive? Seriously?

Church and state are, of course, the primary issues where people get all finger pointy and judgey about others. “You’re either with us or against us” seems to be the attitude du jour. One would think that a religious endeavor would open people’s hearts and bring them closer to kindness and an ability to relate to one another in a way that that honors that we are all created differently. Sadly, it only seems to push us further apart.

I have studied different religious for most of my life and I do not mean just my adult life. I was kicked out of more churches than you can shake a stick at before I left Kentucky at age sixteen.  I am fascinated by religion, spirituality, and all of the ways that people find their way to God. I love the different practices that move people to spiritual ecstasy and bring them to their highest spiritual selves.

I began my own spiritual practice in the Christian church and still have tremendous respect for much of what it teaches. No, this is not a post to slam anyone’s faith, so don’t get antsy with me. It is also not a post to promote one faith over another. It is to uphold what seems to be one commonality among most paths I have studied:  Don’t be an asshole. If you consider each of the Ten Commandments and the two Great Commandments, they pretty much boil down to “Don’t be an asshole.”

So I told you that to tell you this, as my mother would say.

I was innocently driving to the store today to pick up some milk and a couple of other items and I noted the bumper sticker on the Jeep in front of me:

I am pleased to be informed by bumper literature that this man is pulling my share (yes, it was a male driver), that this man is working so hard driving his Jeep in Pleasant Valley, just so I don’t have to. I’m guessing he will be over any minute now to mop my floors and feed my chickens and make supper for my family which he will provide. Thank you, O Generous Republican.

I am so grateful we have Republicans so that those of us who are (enthusiastically) not Republicans do not have to work. I just got the word today and whew, had I known before, it would have saved me a big ol’ ton of work. I’m passing this along as well so that all of you out there who are not Republicans know to put down your shovels, walk away from the cash registers you jockey, take off your headsets, and drop that bedpan you’re changing. The Republicans are here and are working hard so we don’t have to.

I have friends who are Republicans who look at me wide-eyed and ask why everyone thinks Republicans are assholes. This, friends. This is why. No, all of Republicans should not be judged by the idiots among them. All groups have idiots and they are generally the loudest ones in the bunch and I am truly sorry that people like this guy and others like him are your cross to bear. At least you get to be in the club and not one of the ones reprimanded for sloth and dependence. You know, those of us who create the heavy load the man in the Jeep carries for us.

The true root of assholery is in the presumption that you know a person. Mind you, I can say that I know a little bit about the guy in the Jeep because he put what he wanted me to know about him right there on his vehicle for me to read. But he doesn’t know me. He doesn’t know how hard I have worked, how far I have come, or how many heavy, almost unbearable, loads I have carried for others and the odd part is I’m not even a Republican!!  I’m sure that might be clear by now, but just in case it isn’t, there you go.

That brings me to this little gem that is very popular on Facebook these days: 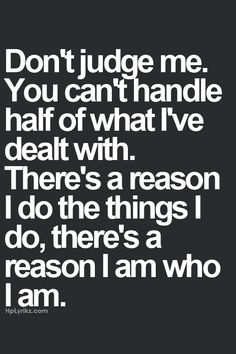 Ah, see? Now that I have read it, my reaction is to judge the person who posts this as being presumptuous and defensive. How dare this person presume to know what I can and cannot handle? For all they know, I have managed five times the stuff they’ve handled and are bitching about. And maybe I did it with the grace of not turning effort and endurance into a pissing contest. And maybe I honored who they were and the strengths in them rather than automatically assuming they have handled so much more or less than I have.

Now I say, “Don’t judge me” in jest after I say something intentionally and obviously stupid, but have you noticed that most people who whine about “Don’t judge me!!” are the people who would come out on the losing end of the scale if the average person actually did decide to judge them? If we know we are living a life of integrity and honor, we should welcome the opportunity for others to judge us.If you made stupid choices that took you to bad places in your life, you should not be surprised when people form opinions about you that you do not appreciate.

What we should denounce more than one another is the separatism that these types of statements create. “You are not as good as I am! You have not worked as hard as I have! You have not endured as much as I have!” You. You. You. When I read an internet meme or bumper sticker that addresses “You,” I am smart enough to know it’s talking to me and that is when things get personal. This is how factions are created.

Since my spiritual inclinations lean more toward the mystical, there is a huge push toward “we are all one.” That is a precious thought, but I do struggle mightily with it, I have to confess. I try hard to entertain the Dr. Wayne Dyerian idea that the stardust that makes up all of us brings us together as kindred dear and brothers and sisters of the universe, but people who try to define me and put me in a box when they do not know me at all are people with whom I have no interest in being “one.”

So where do acceptance and discernment find their realistic applications in the art of being a good and gracious person? How do we define ourselves in terms of being loving and accepting without turning into doormats?

This is a dilemma I work on constantly.

What do chairs think all day?  “Great. Here comes another asshole.” I don’t want to be a chair.

And I am really tired of humoring assholes. Thoughts?