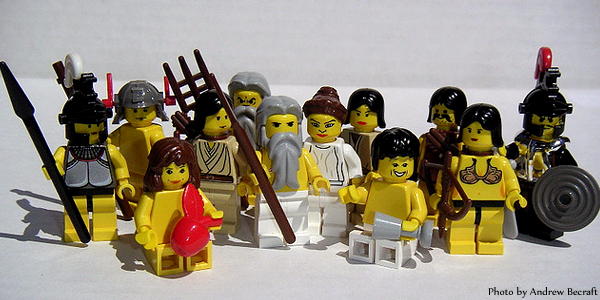 Of Gods and Goddesses and Tenets (Oh My!)

In 2012, I wrote and published a book called Energy Magic that was many years in development. In it, I explore a practice that is as old as humankind itself: the use of magical energy to achieve positive manifestation for life change. As I began to work with the spiritual energy and “buzz” that exists above and beyond whatever path we take to reach it, I came under fire from all sides. The Christians felt I was too Pagan. The Pagans felt I was too Christian. The hardcore Pagans thought I was too vanilla and New Agey. I was called “pedestrian,” and had to sit and think for a while on all of the connotations of that grand slam.

I knew early on in promoting this universal premise of moving energy according to the laws of physics and common spiritual experience that I would have to separate out my own beliefs and practices from the heart of Energy Magic. It was for everyone, not just for me and not just for Pagans, so I had to rise above my own practice, dig deeper, and find the underlying commonalities. I was grateful for the multi-path experience of my academic and spiritual life that let me learn about and share practice with so many different religions. It enabled me to see that under it all, once you get rid of the human manipulations that so often corrupt all religions, we are all doing the same thing.

Crossing picket lines is not always easy, however, and terminology can be dicey. Everyone prefers to have their vision of The Divine called whatever they prefer to call It. I have found that whatever “It” is that is behind the energy we consider sacred and holy does not at all care what we call It. People care. The energy Itself works with the Southern adage of “Call me anything except late to supper.” “God” doesn’t care about labels as long as you engage.

Pagans, like Christians, often immediately associate the word “God” with a male deity. Throughout discussions, I sometimes say “God,” but is not intended as gender specific. I use it to identify the immense, genderless force that is external from us and seems, for whatever reason, invested in our best possible outcome. I can give no evidence to support this belief other than to say that every experience I have ever had in my life supports that theory. I can say with complete confidence that all I went through in my life, even some truly awful stuff, took me to a place where I needed to be and pushed forward my own spiritual development in some way, even when I resisted. I can feel external influence upon this. I have seen this same effect in the lives of friends, family, co-clergy, and in the many clients I encounter as a professional life coach. I can also say when things were horrible in my life, it was often because I was determined to get in my own way and not listen to what Spirit was telling me.

I am a polytheistic Pagan Witch woman and I love my Goddesses just as I love my Gods. I revel in the individual personalities inherent in my Gods and Goddesses, but I can also feel the oneness behind them and I have personally connected with God as a “oneness” through many different spiritual paths. Sometimes, people ask how I can know that the energy I feel and the “God” I experience through these various paths is the “real” God. In response, I can only say that if a person has to ask, then they have never truly been in the presence of God. Trust me, there is no mistake. Like a sneeze or an orgasm, once you have felt true spiritual ecstasy through the presence of God/dess, you will never mistake anything else for it. I have encountered God full force in Christian churches, in Pagan rituals, in a Native American sweat lodge, in an ashram, in a mosque, or just walking in the woods. I have heard the voice of God on the radio through a song, on a billboard, and in an off-hand remark made by a child. Although my own practice is passionately polytheistic, for the purposes of Energy Magic, I stretch past that into the full Divine flow that reaches out to all people.

Energy Magic as presented in this blog is founded on some basic premises and while it is not essential that each person using Energy Magic embrace all of these ideas as their own, it may be helpful to know that it is from these standards that the practice is born:

1) There is a force in our human experience, that is bigger than we are, that is omniscient, and that carries us (sometimes kicking and screaming) toward our own greatest good and overall, to the greatest good of humanity. People give this force different names, but It refers to whatever power(s) we each consider sacred and holy. We sometimes call this force “God” or “Goddess” and It exists in all things. We connect with the power of The Divine through our life experiences and expressions of nature.

2) Humans possess within them a life force, our soul or our spirit, that is imbued with the combined power of conscious thoughts and subconscious processes. Our spirit is what creates who we are.

3) People are ultimately responsible for their own choices and their own behavior. We have the free will choice to seek out God or distance ourselves from God, but we are always fully accountable for our own actions and behavior.

4) Psychologically speaking, people respond to certain objects, colors, scents, and situations in a conditioned way. While this can be – and often is – individual to the person, there are also common reactions to certain influences that tend to draw us together as a human species.

5) We do not have to understand The Divine to have a flourishing relationship with The Divine and to receive its blessings.

Energy Magic celebrates the common sacred feelings and moments in our lives, regardless of the path we choose to reach out to God. It does not deal with the diversity in those paths. There is already too much divisiveness, even among similar Pagan paths. Energy Magic is about the joining of different theologies in the common experience of welcoming the power of God into our lives and using our own inherent energies to create a sacred and blessed life on this Earth.