FIX ALL THE THINGS!!

That’s what it feels like my life screamed at me in 2014. The yellow in that graphic reminds me of a highlighter and I feel like someone looked at the script of my life and said, “This is wrong with you. This is wrong…this…this..this…” and then said, “OK, fix it” and then put a revolver to my head and cocked it.

Sometimes, I wish I had just taken the bullet.

I am eager to put 2014 to sleep in the bed of history even though it ultimately brought tremendous rewards and accomplishment. I did not get the winner’s blue ribbon, but I at least got the green participation ribbon. The result is that I am in a better place now than when I started the year, but I am so exhausted on all levels that I look at the work of hte coming year and groan.

When I started the year, I was a happy and successful published author with a flawed but enjoyable marriage and a year of writing and creating laid out ahead of me. Then in March, a slight adjustment in how a prominent website displays their book listings caused my book sales to plummet by a solid 70% or so. It’s hard to believe that one shift would make such a huge difference, but it sure did. I wrote many more books during the interim and still, the royalties remain around the same in that 30%-of-what-you-used-to-make bracket. I studied probably thirty or more books on marketing strategies and I still hang out in that area. Writing is still my passion and I will continue it no matter what, but it became clear that in order to continue my own contribution to the family income, I would have to find another revenue source. I touched on this dilemma a couple of entries ago and received some great feedback and suggestions from my wonderful readers.

I pepped up my resume and began the search. I have a great deal of experience in many areas, but the fact is that I am a 53-year-old stunningly beautiful woman who has not worked a traditional job in seventeen years. One would think that being self-employed would speak volumes toward motivation and skills, but there are very real setbacks to re-entering the work force after being self-employed. Self-employed means that your business did not do well and you are resorting to a return to the traditional work force. Self-employed means that you have the ability to quit at any time and return to your own business ownership, which technically, anyone can do, but when you’ve done it before, you are seen as more likely to do it again. Self-employed means that there is no employer to phone and ask if you are a screw up. Self-employed means that you are more accustomed to setting the rules than following them. I applied for county jobs, since I was an Air Force civil servant employee for almost fifteen years. As that did not pan out, I began to apply for non-government jobs. I looked into several online money-making opportunities like Quicktate and other transcription and copyediting services.

I also worked in creative venues. I made Weeping Angels (www.katrinarasbold.com/weepingangels) and other crafty things. I started online classes. I tried to set up classes to teach in person. None of these things panned out. All the while, I continued to write books and continued to stay in the same income bracket.

Out of the blue, a friend of my husband’s who works with him at the Veterans Services building in Placerville mentioned that he wanted to sell out his computer sales and repair business. Eric emailed and asked me if I would be interested in taking it over and I said yes immediately. I know a lot about computer repair, more than many people think I do, but I am not as skilled as others. I know a lot about running a business, but I am not as skilled as others. Still, after months of looking for something, anything that felt right, this fell right into my lap. The terms were good, so I agreed and within the next two weeks, the paperwork will be official.

Eric goes with me one of the days. Dylan works on Saturdays with me and Nathan on Sundays. Phil, my tech, comes in when he can. We spent a lot of time cleaning out the shop and the storage room so that we could organize inventory and get to everything. The winter months are traditionally dead in our venue, so we use them to build up machines for resale and get the shop ready for the busy time of the year.

I got over being intimidated by the idea after the first weekend, but had a bit of a crisis Saturday night. Eric was great at talking me through the last bit of insecurity and now I am excited about it. I look forward to going every weekend. This is my little shop. The banner with the old name is still up since we do not officially change hands until after the first of the year, so I photoshopped in a fake banner with the new name in place of where the old one now hangs. 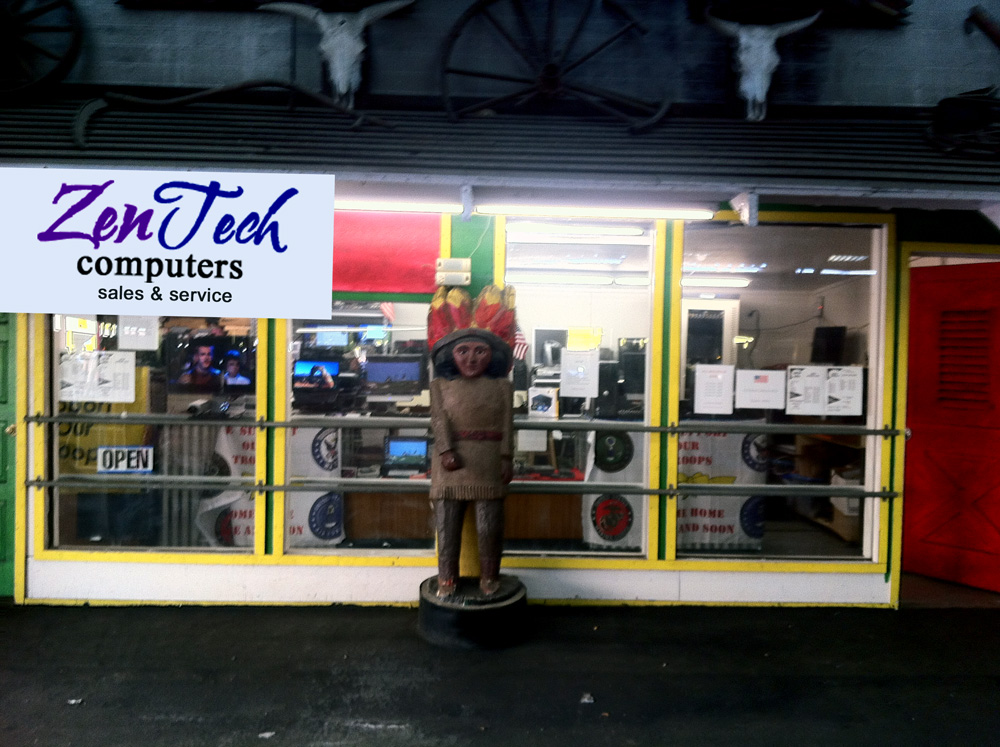 The original name of the business is SMD Computers, which stands for “Secure Media Destruction.” Part of the business is destroying electronic data for places like tax and insurance companies. Shit, my “Support Our Troops” banner is falling down. Ah well. I’ll fix it on Saturday.

Anyway, SMD Computers – we go to these businesses and use hydraulic presses to crush their hard drives. Unfortunately, “SMD” is internet lingo for “Suck My Dick” and I am not excited about staying with that idea for a business model, at least not a computer sales and service business model. That means the name had to change and ZTC is where we landed.

Ha. “Hackers” is the movie playing on our display monitor. How appropriate.

For now, even though there the business does not yet turn a profit for me, the plan is in place, so I do not have to focus on finding a job right now. I just have to work on building the business that fell into my lap. We have a contract in place to provide working desktop computers to a business, which will keep us afloat while I build the business. This also frees me up to continue writing during the week.

The long-term plan is to explore the idea of moving the business to a closer storefront so I can have shop hours during the week as well.

This was only one of the many ways that The Universe pushed me into step up and into my own empowerment. I was very happy hiding in my house writing books and having very little in the way of impact in the world. There is comfort in people expecting little from you…until they expect more and then there is extreme discomfort. I do not think I have ever felt so old, so worn out, so abused, so incapable, and so bereft as I felt this year about myself. I told myself that I had quite an ego on me and that my self-esteem was well intact, but events over the past year put a magnifying glass to that idea and showed me that how I thought things were was several paces to the left of reality.

Fix your health. Fix your world view. Fix your relationships. Fix your insecurities. Fix your physical, mental, emotional, sexual, social, magical, spiritual, interpersonal, and deepest-know-never-confessed weaknesses. The job search is just one of the defining moments of my year that shoved me into admissions I preferred not to make and realities I preferred not to see. They are what have been called “inconvenient truths.”

The common denominator to all of the issues that presented was one of stepping into my own empowerment and developing greater strength as a person. I always thought of myself as an extremely strong individual, but this year showed me how easily I crumple on somethings. I am determined to spend 2014 working aggressively to walk my talk and become a better, more solid person.

Years ago, I made this cover for my Facebook page:

I’m not hiding…it found me. I’m not running from it anymore and I am not only celebrating it, but developing it even further.

So this is me: 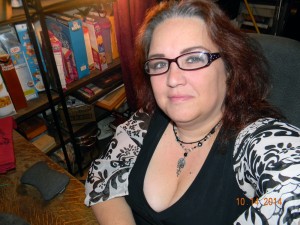 Two months ago and still a deer trapped in headlights from the sheer impact of the Mack truck that was 2014 and plowed into me. Now, I am ready to own that shit. Bring on 2015.