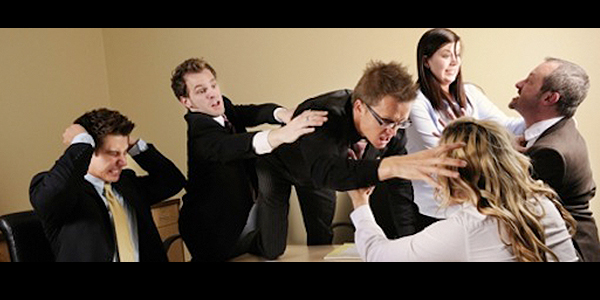 Within the past two weeks, I have seen several articles by Pagan columnists whose work I enjoy expressing surprise and dismay at how other Pagans speak to one another in online message boards. Honestly, I can only look stunned whenever I hear this. Like this: O_O

Usually, there are platitudes involved such as “In our enlightened age…” and “As evolved spiritual beings…” to legitimize the observations. What goes through my mind when I read this is, “Really???? Where have you BEEN and how new are you at this?”  The observation that Pagans are sometimes shitty to one another online is usually followed by a “tsk tsk tsk” reprimand and encouragement that we demand more from ourselves and be nice, dammit!

It makes me smile, truly. It makes me wonder what kind of disconnected world the writer lives in that they are just now figuring out that there are plenty of Pagans who are just total assholes, just as there are Christians and Jews and Muslims and Atheists who are total assholes. The internet will always attract trolls of all faiths and Paganism in particular has such a wide range of acceptance (not that there’s anything wrong with that) that it will always cast a wider net into assholedom.

We even have big meetings of Pagan assholes and drama queens and call them “Witch Wars.” Even in our own local community, some of the most revered leaders are given to public and hysterical bouts of drama queen assholery  to the point that events have to be planned around the fact that they may have a mental break down and start taking emotional hostages (or in some cases, actual ones) right and left. Aside from what happens online, we have a good share of face-to-face assholes who will happily dump their rage all over you in public OR private.  When there are assholes around, it always seems to fall to the non-assholes to manage them or work around them.  This is not a new behavior.  I have been a Witch for almost thirty years and almost as often as I have met wonderful people on the Pagan path, I have met total and complete assholes.

Yes, there are Pagans whose behavior is deplorable… because Pagans are PEOPLE and PEOPLE often have behavior that is deplorable. We can point, cover our mouths, and widen our eyes in horror, but really, what does that solve? When was the last time that someone was called out on their behavior and said, “Oh my! I really am an asshole! I must change this forthwith!”? (Hint: Rarely.) It is more often that if someone is already involved in assholery, they are going to up the ante, scream “VICTIM,” and take the drama to an all new level and then we are off to the races.  It is important to note that by the time they get to us, most assholes have a great deal of experience with this behavior and are, in fact, professional assholes.  When we try to come back on them and make them accountable for their actions, the result is often that they will bring us to their asshole level and then beat us with experience. 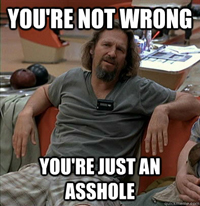 Although it is tempting to do so, we must fight the urge to be compassionate and understanding of the assholes circumstances that drove this person to a life of assholery.  This is one step into the process of becoming an asshole enabler. When we make it OK to be an asshole (“Hey! I’m an asshole and that’s A-OK!“) because they had a hard life or because they are challenged in some way, they have no reason to change.  There are plenty of us who have had terrible lives and come out of it not an asshole.  When people are used to having their assholery overlooked by others, they will say things like “That’s just how I am” and “If people don’t like the fact that I speak my mind, they can f*ck off.” Usually, the asshole behavior is seen (by the asshole) as some kind of positive attribute and that having no filters and routinely abusing people is OK because “that is just how I am.”  Note:  People who feel the need to qualify their behavior by saying, “If people don’t like how I am, they can f*ck off” are usually the assholes in the bunch.  Decent people don’t need to make such statements.

So what can we do? As “they” say, “The only person we can control is ourselves.” We cannot dictate the behavior of others, but we can certainly use our own behavior to encourage or curtail assholery. We can let assholes know what behaviors are and are not welcome in our sphere of influence. The trap is that as I said before, calling them out on their behavior rarely has any positive impact and often will escalate the situation. So what to do instead?

What do you do when a child is having a tantrum that will discourage repeat performances? *You walk away* You let give them the message, spoken or unspoken, in a very calm fashion, “As long as you behave this way, I will not interact with you.” The last thing you want to do is to give them what they want in order to shut them up. To cave in to the tantrum teaches them that this behavior is a useful tool. Instead, you show them that their behavior has no effect and is a waste of time and energy. In the case of assholery, you apply the same principle on a 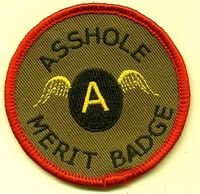 different level. You ignore them. The worst thing you can do to an egomaniac or a drama queen is to give them the silent message that what they are saying or doing does not matter on any level.

Just like with a little kid, any attention to the bad behavior of adults – assume that legal intervention is not necessary and yes, sometimes it is even with Pagans – just feeds the monster.  My suggestion, based on years as a professional life coach teaching people how to deal with assholes in their lives, is to include the known asshole in as few activities as possible.  When you are forced to deal with an asshole and their asshole behavior manifests, simply stare at them really hard and walk away.  Love yourself enough to not have that influence in your life.  If you must engage them on some level, keep your voice very low, very calm, and use small words and not a lot of them.  Practices phrases such as, “You will NOT speak to me that way.”  Typically, the lower and firmer you make the tone of your own voice, the louder and more hysterical theirs will become because like a child, they are not getting the reaction they want and will attempt to escalate the situation to the point that they hit payoff.  Don’t worry if this happens.  They are only demonstrating the accuracy of your assessment that they are, in fact, and asshole.  Say things like, “You are making a scene and embarrassing yourself” and “There is no need for this kind of behavior” and “I will not be abused by you in this fashion.”  Always maintain the low, calm voice.

Whenever it is possible to do so, physically walk away. Whatever you do, do not lose your cool and do not engage in the drama or hysterics.  Imagine that you are dealing with that ranting child or even a vicious dog.  Make slow, deliberate moves, keep your tone calm, and leave as soon as possible.

If you are online, you are even more protected.  If the asshole comment appears on your own column, you likely have administrative access to delete the comment and even block the person who is acting inappropriately.  If you see it on someone else’s blog or forum turf, remember the idea that giving the asshole attention feeds their monster.  It gives them what they want.  They are buying into the idea that “any attention is good attention” and therefore, your best move is to give them none.

I am all for love and tolerance and acceptance, but I also firmly believe in Life Law #8:  We teach others how to treat us.  We let others know with our acceptance or our rejection what we will and will not tolerate in our lives.  In a world where acknowledging and admonishing asshole behavior clearly only encourages it, the only alternative that does work is starving the monster.  Protect your world.  Be vigilant about the kinds of people you allow to influence your life.  Make choices that welcome positive and loving people into your life and discouraging negative, angry assholes from roosting on your perch.

Walk in love and light.  Don’t be an asshole.

One thought on “Dealing With Pagan Assholes”