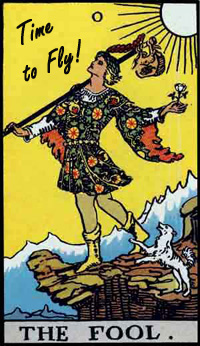 From my upcoming book, “Tarot For Real People”:

A common practice among those who make a serious study of the Tarot is to develop a story that takes The Fool, the first card of the Major Arcana, on a quest through the remainder of the Major Arcana until he ends up at The World card, having completed his quest and his cycle.

In our story, The Fool begins his journey carefree and open. He is a receptive vessel, ready to fill himself with all that the World has to offer.

He first encounters The Magician and The High Priestess, who serve as his introduction to magic and his own empowerment. They teach him that he can be anything he wishes to be and live the life he dreams may one day be. The Magician shows him that it is possible to manifest his own will on earth by Heavenly and personal powers. The High Priestess whispers her secrets of magic and mystery to him, conveying the esoteric wisdom and promises of rewards untold.

From there, he meets The Empress and The Emperor, who teach that magic is a combination of blessings from the Universe (The Empress) and the application of personal will (The Emperor).  The Empress shows him the bounty of the harvest and promises the answers to all of his inner most desires. The Emperor shows him how to command the energies to move to his direction and the mastery of his own intentions.

Now that his magical training is complete, he meets his first opposition on his path, The Hierophant, who brings him face-to-face with the oppression and pressure of societal dictates, standards, and expectations. The Hierophant whispers the resistance of patriarchal society to those who seek esoteric wisdom and independent thought. He frowns sternly and disapprovingly at the newfound knowledge The Fool has acquired and bids him to fall back into place with the others who sleep and do not wish to dream.

This brings him to The Lovers, who demand that he make a choice. Will he stand up for himself and accept the challenges that present or will he cave in to the pressures of the outside world to conform to a particular status quo? Will he take the difficult road that involves hewing his own path and creating his own manifest destiny or will he take the easier path which involves sacrificing a part of himself and leaving his pursuit of evolutionary growth?

Once he makes his choice, The Chariot prompts him to move forward quickly and he barrels along at such break-neck speed that he feels he will become lost in the wind. He adjusts to the speed and learns to use it to his advantage, pulling the power of the opposing forces of society and magic under his control.

With great power comes great responsibility and in the wake of The Chariot propelling him to tremendous speeds, The Fool encounters Strength, a cautionary card that reminds him that energy  must be controlled and we must know when to release them and when to restrain them. This discernment is the key to moderating what is given to us for effective use.

As much as The Chariot and Strength teach The Fool to harness the energies around him, The Hermit introduces the need for quiet and solitude. Through The Hermit, he learns to go within to find the wisdom and value of reclusive contemplation. He learns the importance of stillness in contrast to intense movement.

This understanding brings him to his first point of reconciliation through the Wheel of Fortune. The Wheel takes the lessons he has learned so far and brings them to the counsel and disposition of Fate, which then evaluates his progress and determines if he is on the right track. Fate then presents him with a series of challenges to put him through the fire and galvanize his strengths while purging his weaknesses.

His first stop through this gauntlet is the Justice card, where he meets with measurement, evaluation, and then appropriate and objective adjudication. This is a time for atonement and adjustment in the karmic balance.

The Hanged Man brings him a period of contemplation and reflection over his place in the world by turning him upside down to see things from a different perspective. This is the esoteric equivalent of “go to your room and think about what you have done.”

After the perspectives given by the Hanged Man take root, intense change comes into The Fool’s life. The plan of the Universe is that following the counsel and contemplation of The Hanged Man, Death rides in and sweeps clean away any obstacles to The Fool’s advancement. Changes take place on a broad scale.

Temperance gives him a moment to adjust to the new life that the Universe created and to blend the new elements into a workable, functioning flow. The Hanged Man changes his mental and cognitive perspective while Death changes his external conditions. Temperance allows him to process and blend those changes into an integrated and workable dynamic.

He barely gets stable on his feet before the next challenge comes. Suddenly, he must confront every demon he never bothered to best, every addiction he failed to conquer, and every fear he allowed to linger and fester. The Devil forces him to acknowledge the next level of refinement as his own weaknesses are brought to stark focus and he must face his own greatest enemy:  Himself.

Fed by the process of change that began when he faced Death, The Fool now endures a full breakdown on all levels. The Tower lays waste to the remains of his life and he finds that while he thought that he had surrendered all a few steps earlier on his journey, he has now been stripped bare. His very soul, his dignity, his security, and his ego all come under the sword as he aggressively questions what he has learned, who he is in the world, and what he has to offer.

The Fool finds himself in a situation similar to his beginning. Again, he has nothing, but the carefree innocence he initially brought to the journey is now gone and in its place, he feels tremendous despair and longing. Part of him wishes he had never started the journey in the first place so he would not have to feel the denigration and loss that he feels at this time. Flat out on his back, unable to stand or even kneel, darkness overtakes him and within that black embrace, he sees The Star. Within that first Star of the night, he finds the essence of hope and he dares to dream once more.

As he meditates in the darkness, seeking wisdom from within, The Moon rises and ephemeral and misleading shadows begin to dance around him, subtly playing with the pockets of quicksilver blackness. Among the movements and shifts of shadow, both outside and inside of himself, he begins to see the ghosts of insecurities and fears flitting around him. Can he really rebuild or should he simply lie down, close his eyes, and die? Is he strong enough to walk another step, much less another mile?

He falls asleep with the doubts and eerie shadows dancing in his mind and around his body, but wakes to the warmth of The Sun on his face as it peeps over the horizon. The Sun pushes away the dark and turns the sky a brilliant yellow, which fills The Fool with courage and faith. The bowing plants around him reach upward to the golden orb and so does he, filling the life-affirming kiss upon his skin. He realizes that just as The Sun radiates from above, so does he radiate from within.

This realization brings him to the final point of reconciliation, which is Judgement.  So great is his own light from within once the shadows and doubts are cleared away by the power of The Sun, that his Karmic debt is purged, released into the fires from above and within.

He stands clean and reborn, ready to walk over the threshold of The World, which brings closure to his trek and opens the door into a new level of experience. Equipped with the lessons from his journey and elevated to a new spiritual realm, he moves forward with confidence as the innocent, unburdened Fool once more, open to the lessons The Universe brings; a receptive vessel to be filled with the mysteries and wisdom of magic.

One thought on “CHAPTER 9 – THE FOOL’S JOURNEY”