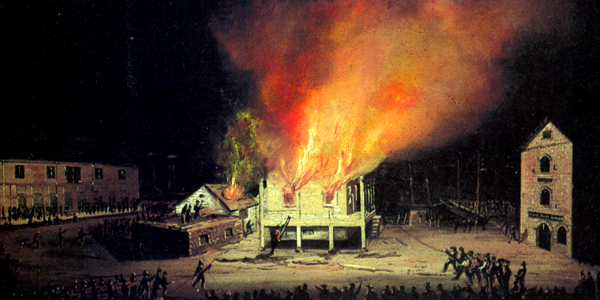 It can happen to all of us, although thankfully, not usually to the degree we see in the graphic above. Rituals fail. It is easy to raise one knowing eyebrow and say that it failed because it was intended to fail and all things are exactly as they should be and blah, blah, blah, but there is a huge difference in knowing that rituals sometimes do not go as planned versus understanding why rituals sometimes go in the ditch and how to manage that inevitability.

Although not a prevalent a belief as it used to be, there are still  those who will “tsk tsk” and frown piously, saying that if spell work fails, obviously the practitioner did not have enough faith, lit candles in the wrong order, or committed some other vital misstep. Rarely have I found this to be the case.The Lord and Lady do not wait around with bated breath for magical people to make a protocol error so They can punish them and then laugh at them behind Their celestial hands. There will always be those who seek to make magic more complicated and fearsome than it really is. To them, this mystique makes it more valuable and esoteric. To me, the simplicity of magic and its availability to everyone is what makes it special and worthwhile.

It is important to remember that the presentation of your intention in ritual is to only the final part of the magical process and is often the least significant factor. Ritual is basically an energy boost to a magical work that already exists. You created the actual spell and magic through thought and planning. The enactment is merely a formality.

More often when my own magic goes awry or a student calls me in tears because they “screwed up,” we can trace the problem back to some very simple issues and rarely are they anything we should take personally. Objectify, objectify, objectify. View what has happened as nothing more than information conveyed to the practitioner in the clearest, most obvious way possible. Think of it as a Divine redirect and for the record, it does not happen exclusively to newcomers to the magical arts. Experienced and wise magic workers know to monitor the flow of energy and pay close attention when things go sideways….and they will at times.

How does this manifest?

It can be as complex as “feeling” that the magical energy does not leave the area and instead, grounds while in the circle. It can be as simple as barely organized chaos:

You set up your ritual area and a child you thought was sleeping soundly wakes with a nightmare or otherwise needs attention.

The cat knocks over a plant in the next room.

Unexpected guests come to the door.

The candles do not stay lit when there is no breeze.

Your ritual notes or other important tools disappear when you could swear they were just right there.

The flow of the ritual is choppy and does not feel organic or comfortable.

If working with others, you have a high drop out rate and people with integral ritual roles are unable to attend at the last minute.

A sudden weather change derails out outside ritual.

The ways that a ritual can fall apart around you are endless and these are only a smattering of examples. Your first inclination will be to remain adaptable and show tremendous flexibility, managing problems as they arise. After a while, however, it becomes critical that you stop and recognize what is happening rather than continuing to attempt to “herd the cats.”

The beauty of it is that you do not have to know or understand immediately why the ritual is discombobulating. You merely have to acknowledge that you are meeting an unusual amount of resistance to the magical work you planned. If one or two things trip you up, that is not normally cause for concern. If you experience a greater number of interfering factors, then it is time to get the message.

If this happens, the best course of action is to not proceed as planned. You can still have ritual, but change the intention and focus. Simply *be* in the ritual area and experience the magical flow that is present to see what it has to say to you. Shift your magical goal to visioning, gratitude, or divining and note any information that comes to you. The other option is to postpone the magical work with the understanding that something about what you were going to do is not right. It is important to note that “not right” does not always mean “wrong.” It can also mean, “not yet” or “not in this way.” In retrospect, you might later see why you were redirected.

Some reasons could be:

As humans, we  want to believe that we know what is best at any given time and often cannot imagine that we do not have the full picture. Humility, objectivity, and grace are valuable tools in magical work. It is helpful to heed the gentle nudges from the Divine. These help us to tune into the flow of natural progression with a much cleaner and stronger signal.

If you choose to continue on with your energy work despite The Universe’s attempt to curtail your work, you will not likely bring about Armageddon. More commonly, the worst that will happen is that your energy will be grounded and you will not achieve optimal results. Overall, it is better to stop what you are doing, wait a few hours or days while you reevaluate your approach, then try again from a different angle at a different time. Often, the reason for the delay or change will become known as time goes on.