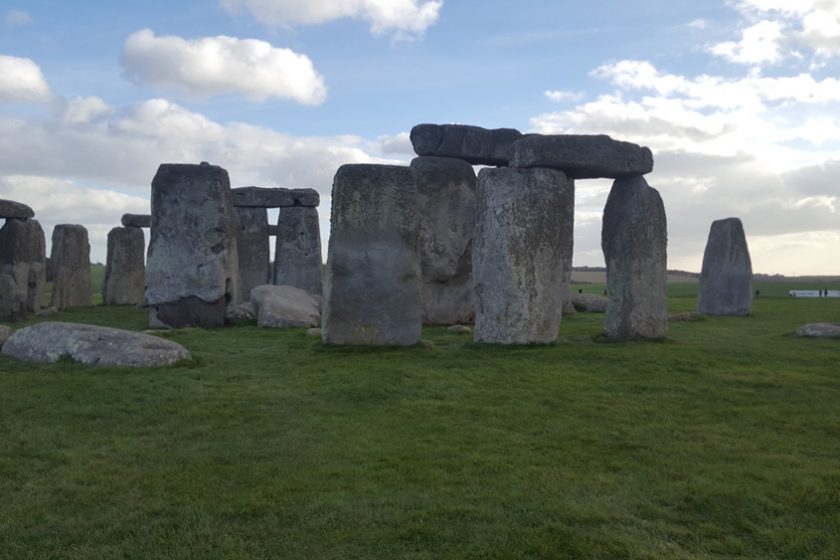 After spending a wonderful time at Salisbury Cathedral under Derreck’s careful guidance, we drove a short distance to Stonehenge in Wiltshire. Derreck was concerned about us driving all the way to Edinburgh. I was surprised to find that his reaction was common in the UK. People do not seem to go much of anywhere, even in their own backyard, and the idea that we would drive from London to Scotland was unheard of to most of the people who heard our plans. England is approximately 53% the size of California, so it’s like driving from my house to Los Angeles, which I have done many times.

But then, I know plenty of people right here at home who have never even left El Dorado County. Trust me, you cannot have a well-rounded, eyes-open view of the world, of society, of humanity, or of life if you never leave your own county, with or without the influence of the internet. Some things, you just have to see for yourself.

So off we went.

An important tool for navigating the UK is a “Sat Nav” (Satellite Navigation) and although ours had issues like a lack of updates for new roads and difficulty finding some addresses, overall, we would be lost, quite literally, without it.

When you arrive at Stonehenge, all you see is a welcome center with a museum, a shop, a small cafe, and a ticket booth. You then wait for a shuttle that takes you out to the monument site. I was very excited for this part of the trip and I am thrilled we got to do it.

When I evaluate a sacred site, I consider many aspects of its overall vibe. I look at the architectural and historical significance, the personal impact to me, put out feelers for any supernatural or paranormal activity and energy, and filter for the magical oomph (ley lines, stored energy, etc).

Winchester Mystery House, for instance, on a scale of zero to one hundred, registers about a ten for me. It feels very sterile and devoid of activity, especially on the beaten trains open to the public. The only time I have ever felt anything there was when I may or may not have strayed into some off-limits areas. Quite by accident, of course. If I actually did, which I likely did not because that would be against the rules. It is beautiful and interesting for its story, but as far as paranormal or magical zest, I feel almost none and since that was part of my expectation in going there, I was disappointed. It wasn’t spooky, and we did the Halloween flashlight tour, and beyond the fun of being in an old, eccentric house, it did little for me.

Having said that, Stonehenge was not at all a letdown, but neither was it the magical pinnacle of my life. It was pretty. It was as ancient as anything I have ever encountered. It was very archeologically significant. I was not, however, in danger of transportation to any other realms or times. I would give it a thirty on that one to one hundred scale. There was a quiver of activity around the heel stone, but it was mostly negligible. I enjoyed being there for the cultural significance of doing it and to cross off a bucket list item. For magical or paranormal buzz, however, I got nothing. I have had people suggest, with furrowed brow, that perhaps I was just not sufficiently tuned into the vibration of the place or maybe it just wasn’t “my” place. While I do not completely reject the idea, my impression is that at one time it likely was rife with sacred power. Now, however, it has been restructured, moved, adjusted, cleaned, studied, trampled, and manipulated to the point that it has become very benign.

Again, I loved it, I loved being there, but the magical buzz was minimal.

Not so less than five miles down the road at Woodhenge. Although it was not much to look at, certainly not as aesthetically impressive as Stonehenge, Woodhenge had a much more intense vibe. It was raining by then, so we did not stay long, but I felt like I could have spent quite a while walking between its posts and processing the energy.

It was unguarded other than a fence and was just *right there* with no one else around. The buzz around it was a bit chaotic, but I got the feeling that was a perimeter deterrence and than once inside, it would crack quite a whip.