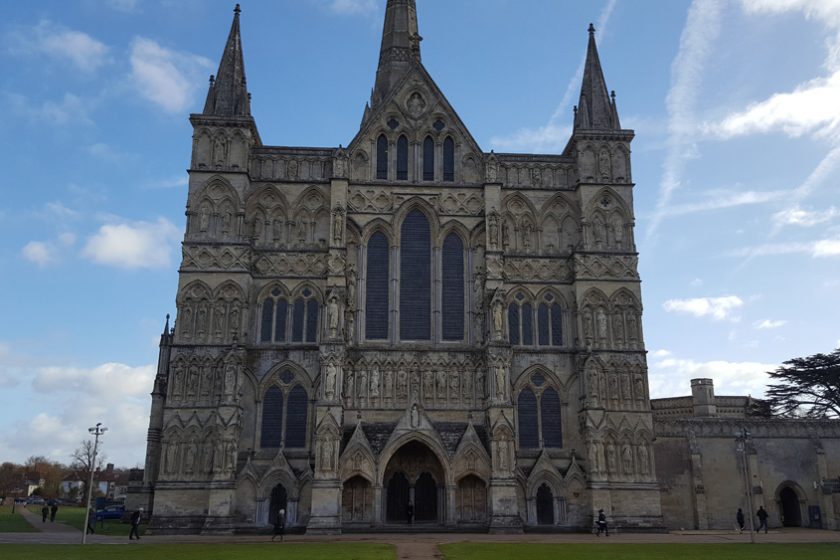 I had never heard of Salisbury Cathedral before arriving at Grasmere House and looking out our window to see this beautiful structure only a short distance away. The next day, we drove through the town (another harrowing driving experience) and into a full carpark to walk through an outdoor mall called “The Old George Mall” to get to the lawn of the cathedral.

It was a wealth of historical goodies and we ended up with our own tour guide, Derreck, who walked us through the entire cathedral and told us things we would never have unearthed on our own.

Salisbury Cathedral is home to the world’s oldest clock, as well as to the tombs of many of the lesser royalties. It has the world’s largest spire and houses one of the four remaining copies of the Magna Carta, the foundation of our own constitution. The copy kept at the Salisbury Cathedral is the best of the four copies. There are seventy-three statues on the west facade of the cathedral alone. To read more about the cathedral, click here. This cathedral was also one of the two models used in Ken Follett’s book Pillars of the Earth.

The numbers after some of the photo captions indicate a note below the photo gallery.

1 – Derreck says it best as he describes to us in this video how the clock works:

2 – The ships bell you see above was used on the HMS Salisbury until 1956. When one of the crew members welcomed a new baby to the family, they are baptized on the ship. The bell was removed and filled with the water to convert it to a baptismal font and then the baby’s name is engraved around the bottom flange of the bell.

3 – The flag that is so old it looks like netting was supposedly carried at the Battle of Bosworth where Richard III died and Henry Tudor became King of England by conquest.

5 – The defining feature that identifies a cathedral is the presence of a cathedra, which is a fancy bishop’s seat.

6 – The Gorges are an interesting pair. She, Helena, was a favorite Lady in Waiting (bed warmer) for Elizabeth I and he was the governor of Hurst Castle. A ship from the Spanish Armada washed up on the shore by the castle and Helena asked Queen Elizabeth if she and her husband could claim it since it was now on their property. The Queen granted the request and included the ship’s contents in the claim. It turned out the ship was loaded with treasure and Sir Thomas and Helena became wealthy beyond their wildest dreams.

7 – These recesses were available to allow petitioners to put their ailing appendages into in order to get them closer to the bones of the saints.

8 – This dipstick goes into a channel in the floor of the cathedral to show how close to the foundation the water table rests. It is just *right there*.  (Eric got to pull the tile up to check the water table)

9 – This is a mason’s mark to identify the stonemason who carved the stone.