Three years ago this month, I decided to take a belly dance class in town. Belly dance has always impressed me and of all dance styles, it is what I most wanted to learn. Hint: the banner above is not me. I have seen women much larger than I am dance beautifully, so I knew size was not a limitation. I found a wonderful teacher and started a beginner class. Within a month, I developed horrible sciatica that lasted for the next two years.

On Thanksgiving Day, 2013, so almost two years later, I walked a 5K marathon and from there, continued a program of walking that led to interval running, which I have kept up with the exception of a three month break to recover from severe plantar fasciitis. I just returned to the running/walking this week. After a month of walking, my sciatica was gone and has not returned.

Now, more than a year of being pain free in my hip, I decided to revisit belly dance classes. I was delighted to find that the same instructor was still teaching in the same place and charging the same amount. The class I took before was a beginner class and was very ‘step by step.’ She mentioned that she did not have a beginner class going, but she had a class that was multi-level and ongoing, so I prepared to go.

Last night was my first class and I neglected to remember until I was in the middle of it that I am really, really terrible at belly dancing. I mean really bad. (Really, extremely bad). It is likely because of all of the gifts I was blessed with in this life, I have no natural grace, no sense of rhythm, and almost no flexibility. Still, I was excited when I dug out my jinglebutt scarves and shoooop! …tied them on with room to spare. Three years ago, I could not get them to go around me and had to use discreet extensions.

I got to the dance studio early so I could pay. Previously, there was a Zumba class before belly dance and I was surprised to see that now, there was an advanced belly dance class before mine. So advanced were they that they did their routines with silver plates balanced on their heads. I think I should say that again. They were belly dancing with freakin silver plates on their heads. The plates never fell that I saw and I watched for a while. O_O 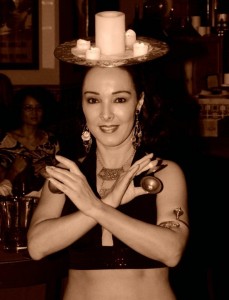 It was like this minus the fire and scalding wax or any food or anything. Those plates were completely still while the rest of their bodies just went bananas.

I sighed heavily. This was going to be interesting.

I remembered little from the previous set of classes three years ago. We had maybe five or six women in it. My new class has ten in addition to me and from what I heard, some were missing. The good news is that this gave me a nice shield of bodies to hide behind. Because it was really chilly outside, I made the mistake of wearing a pullover sweater. Won’t do that again. I wore ugly yoga pants and most of the other ladies had pretty skirts. I’ll fix that as well.

Right off the bat, I was reminded of that significant obstacle to belly dance success… I just don’t have the shake, the shimmy, the glide, the sensual slide for it. I tried and I will keep trying, but I am sure it was extremely amusing to anyone watching. I expect to see it on YouTube at some point.

All of the women in the class are far more advanced than I am. This was so different from the beginner class. They are far out of the “do this..two…three…four” and “stand like this…” and “we’re going to pretend there is a glass wall next to each hip and barely tap it.” They are already into drills and walking shimmies and hip pops and all kinds of shit that my body thinks is very funny.

I persevered and made it through the full hour class, not because I was good enough but because I am good at magic and basically did the invisible spell so I blended into the mirrors and walls. I was drenched in flop sweat and minor desperation by the time we finished. They gathered in a huddle to discuss costuming and choreography for some upcoming event and I put my check in the envelope and slipped out the door.

I will go back next week, but I know I have a very long road ahead of me. The good news is that even though the workout was aggressive, I have no hip pain today, so that is encouraging. I am not yet ready to accept defeat on this. There must be a way for me to teach my body to do this. Right now, it feels like my entire body is one solid structure that will not move independently from the other parts. They were shimmying hips really fast and moving arms really slow and it just wasn’t happening for me. There was some kind of dissonance between my body and my brain when I tried to do it. My brain said, “No, seriously, just do this” and my body just rolled on the floor laughing and suggested we go home and eat cupcakes instead.

So that was my great adventure. I did not sing my body electric and this graceful swan turned out to still be in ugly duckling mode. I will watch and try and work and find my way…or not.

2 thoughts on “Adventures Dancing My Belly”