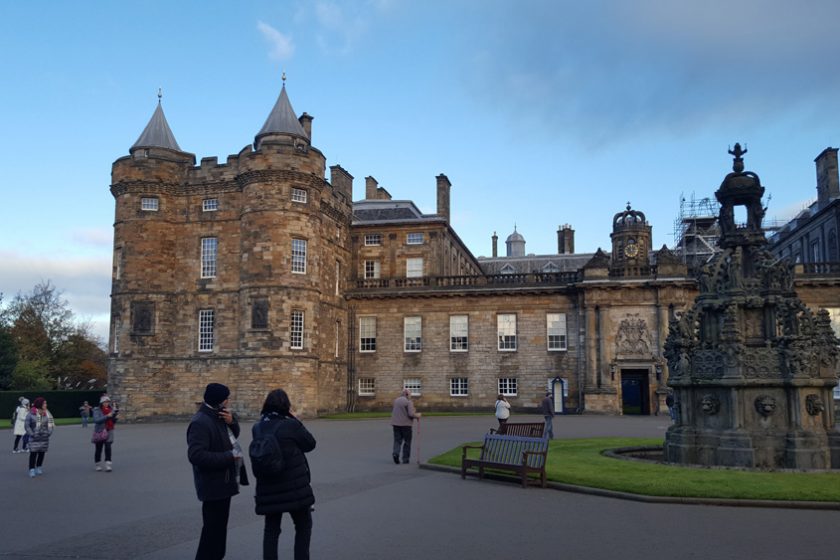 So off we went down The Royal Mile and I swear, it has to be longer than just a mile. My fitbit was having a joyous celebration each and every day on my arm over the nearly 20,000 steps a day and usually, 15-20 flights of stairs climbed. We slept in a bit that morning to help him heal and so I could try and work out a few more restless sleep moments. Breakfast was served at 8:00, so we went downstairs, ate, then went back up and slept some more before heading out.

By the time we finished the castle, we were both pretty tired, but hey, gotta grab those adventures when they are there, so off we went.

Just outside the castle, I found a super cute street performer who asked Eric his name and then said, “I prefer Neil.”

Eric looked puzzled and the guy indicated me and said, “Kneel… before your queen.”  😛  Good times.

Oh yes, we were tired by then, but we still had Sunday Roast to go:

The Sheep Heid Inn is where Queen Elizabeth II often eats when she is in Scotland. The last time I was here, I missed her by a week. The food is amazing, but sadly, by the time we got there, all of the actual roast was gone, so I had a burger.

The inn actually has a skittle alley in back.

Then, it was time to head back to the B&B for another attempt at sleep before checking out the next morning and heading back onto the road for more adventures.