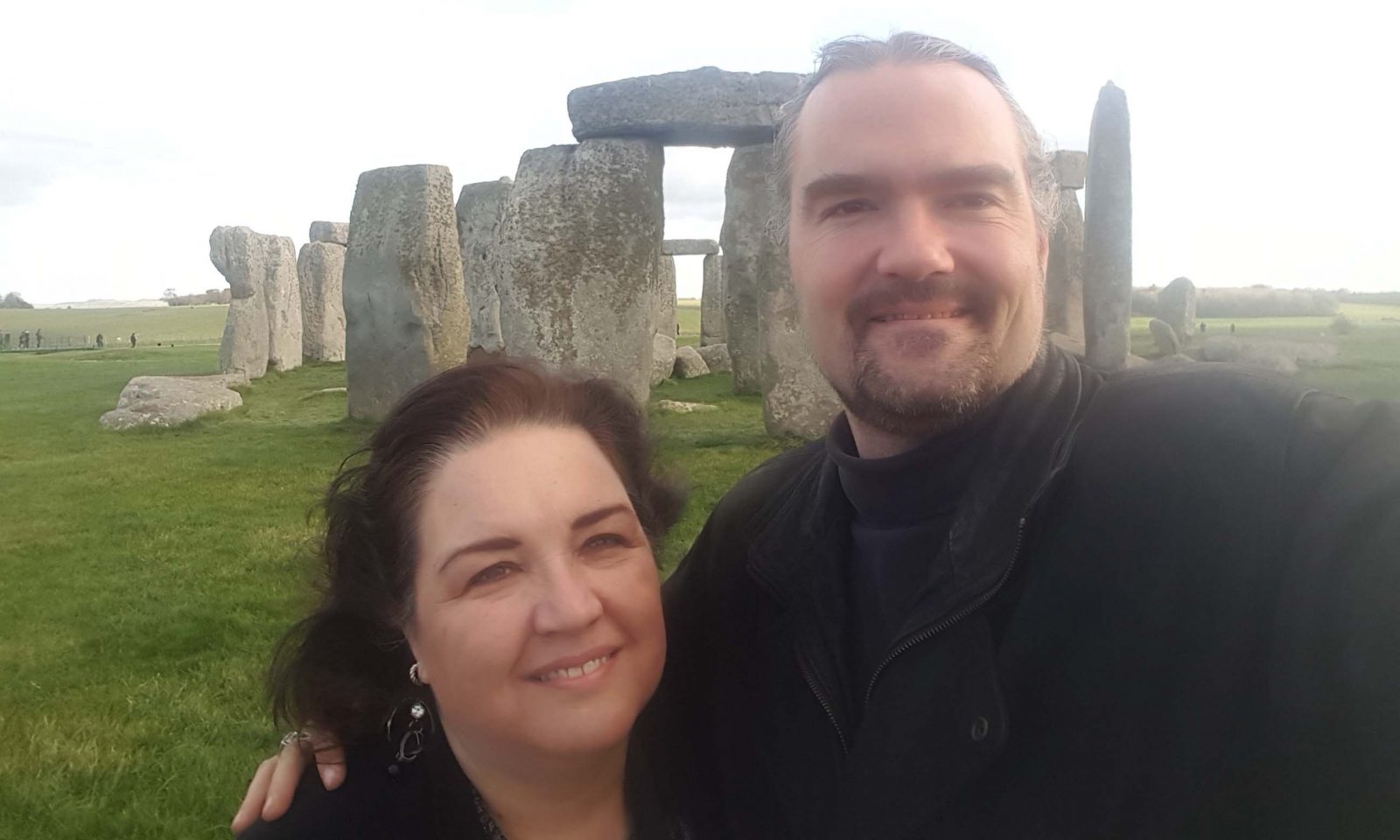 I am writing this (Katrina), but Eric shared all of this with me, so even though this is from my perspective, just know he was in there too.

I met Eric in 1996 in Mountain Home, Idaho – one of my least favorite places on earth. I was coming off of a very demoralizing, enormously painful, and completely inconvenient divorce from a man I first married in 1978. I was generally broken down and pissed off.  I met my first husband in high school, he left me for someone else 19 years later. That pretty well sums up that experience.

Eric was also Air Force, was a whole lot younger than I was back then (he caught up in the intervening years) and was a real hotshot. It shouldn’t have worked, but in the blink of an eye, our six kids were now adults and we were about to celebrate our 20th wedding anniversary.

There was a whole lot in between. Everything from raising kids, new ones and the ones I brought to the marriage, joblessness, starting new businesses, losing parents, relocating to a remote mountain community, writing eleven books together, creating a spiritual path that is now practiced worldwide, performing together musically, one by one, watching children go out into the world, and becoming grandparents. He married into a full family, taking on four children ranging in age from five to nineteen, as well as our own two sons. For several years, we had eight of us under one roof and always, he provided for us.

His hair is now grayer than mine, thanks to Feria. We have made each other laugh and cry. We have worked hard to find our way in the world and create a dynamic that works. It did not come easy, but it was worth it. He was my best friend in 1997 and he is my best friend now in 2017.

A few months ago, he asked me where I would go for our twentieth wedding anniversary if I could go anywhere in the world. We talked about Mexico. We could go to the Basilica of Guadalupe in Mexico City and see the La Santisima Muerte shrine in Tepito. At the time, we still had our little botánica in Roseville, California and both Our Lady of Guadalupe and La Santisima Muerte are sacred to us.

What kept coming back to me, however, was how much I missed him when I visited Scotland with my daughter in 2016. Eric and I have a tremendous affinity for England’s royal family and have shared extensive studies of the British and Scottish monarchies. I write a novel series set in the late 6th century and the early 7th century that takes place all over the UK. My specialty focus of study is on that time period, plus the 1400-1500s, covering the War of the Roses and the Tudor reign.

In the end, we decided to go to London, rent a car and drive all over the country, seeing what we wanted to see, booking hotels on the fly depending on where we were, and following our bliss. He spent a very long time before this aggressively saving to make this happen.

So that’s what we did.

We have had a lot of people say to us, “Oh, you are so lucky that you can do that.” We are not wealthy. We are ordinary people. There is very little “luck” to it. Like the duration of our marriage, we worked hard to make this happen. When I ran my shop, I got up at 4:00 am to drive two hours to open the doors on time. My shop had no heat and no cooling. There were times when it was 30-40 degrees in the shop and times when it was 110 or higher and we were there from 6:30 am until 3:30 pm or 5:00 pm, depending on the day. We made all of our own products and sometimes worked 15-18 hours a day during the week getting everything done.

He and I worked exhaustively to learn how to market and publish books, how to write books people enjoy and then spent long hours writing more than thirty-five books, eleven of those together, over the past three years.

Eric owns a solar energy company and as anyone in that industry knows, it is feast and famine. We take a lot of chances financially because risk is inherent to success.

The theory is that to enjoy financial security and success, a person should ideally have a minimum of seven different income streams. That is a tall order, so we never stop looking for ways to adjust the business or find other avenues for creating wealth and abundance. The hours we invested and continue to invest in that pursuit are countless and it is still a work in progress.

We have known poverty and have made some very difficult decisions and sacrifices in our time together. We have had help from wonderful people along the way. Mostly, however, it was a lot of blood, sweat, tears, praying, and sleepless nights.

This trip represented something important to us that was bigger than simply tolerating one another for twenty years. This was a celebration of survival and ultimately, of thriving.

In the travel information we read while planning this trip, someone asked, “How can you do England on a shoestring?” The answer the expert gave is, “You can’t.” They were right. This shit is expensive, but only if you plan to eat or have a place to sleep.

Americans have some adjustments to make beyond reinterpreting the English language. By virtue of the fact that it is called the “English” language and not the “American” language, we must presume that their way of speaking is the correct way.

This whole “drive on the left” thing, however, has got to go.

There is no iced tea unless you are in Starbucks for such a thing is viewed as an abomination.

There is coffee and “just coffee” is called an Americano.

Breakfast involves pork and beans, sausages, tomatoes, a largish mushroom of some kind, sausages, and bacon that is not exactly bacon.

“Loo” and “lavatory” are now hopelessly outdated words, but “restroom” and “bathroom” are not used. The only time I could get anyone to understand I needed to pee was to say “toilet” or “the ladies’.”

People in England and Scotland dress quite smartly and the contrast illustrates that as a society, Americans dress like bums.

When you go into a grocery store, do not expect an array of soft drinks to purchase. Coke, Diet Coke, and Sprite.

Water served in restaurants is not delicious. In absence of delicious water and iced tea, I lived on Diet Coke for eleven days. It is a wonder I am not radioactive. They also put lime or lemon in your Diet Coke without asking.

There are a lot of French people and German people.

Once you leave London, which is a marvelous cultural melting pot, there are almost no people of color.

People in England do not have bumper stickers or other embellishments on their vehicles. I brought my magnet that says, “My other ride is a TARDIS” and put it on the rental car.

I only saw two pairs of gauges the whole time I was there.

I only saw three people vaping and there are no vape shops in sight.

Marijuana smells different there, but you can still tell it is marijuana.

Brightly colored, fancy leggings are not in style as they are here. In fact, I did not see a single person wearing them the whole time I was there.

Men do not sport long hair for the most part. I saw two men with long hair and one guy with fabulous Tim Minchin dreadlocks.

People on the London Undergrounds and trains all look completely miserable. No one talks to anyone. They are all on their phones or looking sad or resigned.

Police do not patrol. There are cameras set up every few yards that have license plate recognition and instead of pulling you over for a traffic violation, they just send you a bill. Eric asked a girl in Loch Loman how you could then catch drunk drivers. She looked like a cross between Rainbow Brite and Misty from Pokemon. She tilted her head and thought for a moment, then said brightly, “You just don’t get caught!” She then offered him a Guinness.

Most pubs apparently no longer have dart boards.

Don’t drive in London or Edinburgh. Trust me on this.

For most places we went, customer service is not job one. The first hotel where we stayed could not even tell us where to park our car to stay with them.

Think twice about attempting this trip if you are not hale and healthy. Everything, everything, everything is up or town a long series of stairs. When someone tells you something is “literally a five-minute walk” they mean it is a mile and a half away.

TSA is serious about that whole 3-1-1 thing. Read up on it and follow the rules.

So now I will take you day by day through our adventure. We took over 2000 photographs, so I am not editing them for color levels and fanciness or I would be here all day and I have two books to finish by the end of winter.