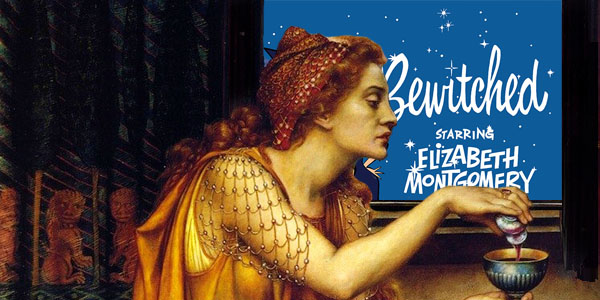 A while back, I did a post on my own favorite Witchy movies and in doing so, I found myself craving the inclusion of several TV shows and mini-series, so now I offer a list of my own favorite submissions in that category. As before, these are my favorites and I do not expect them to agree with anyone else’s. There are several I have not seen, such as many of the kid shows like Sabrina the Teenage Witch and Wizards of Waverly Place, so it isn’t conclusive.

For many of us, this was our first somewhat positive introduction to Witchcraft. Even though Samantha Stephens had to hide her witchiness from the world and even though her husband, Darrin, was unreasonably discriminatory and negative against who she was at her core being when it saved his ass more times than the series could count, everyone wanted to be Sam. I wanted to be Endora, but that is a whole other story. Also, they drank way too much alcohol.

This mini-series claimed my heard from the first few minutes. Epic and beautiful, it captures the literary character of Merlin perfectly, introduces new characters to the story, and shows different facets of old favorites. Sam Neill ages well from young Merlin to old and although the cinematics around Miranda Richardson’s character of Queen Maab are dated and slightly seizure inducing, the series still holds up well.

This show could hardly be called brain candy, but the acting was above par, the writing was excellent and for the most part, the spells used were not only relevant, but quite usable. Charmed prided itself by being the only show with a “licensed fully bonded” demonologist  and occultist on their writing staff.

I never watched Buffy until it was already off the air, but then I power watched all seven seasons and became a true fan. Spawning wonderful phrases like “Wanna Blessed Be” for half-assed Wiccans and working hard to portray Craft in an empowered yet overall positive light, Buffy was action packed and loads of fun.

Although obviously a kid’s show, (Debbie Reynolds!) Halloweentown is a fun watch with a very positive slant on heredity craft. The beauty of this show, which has a series of sequels, is that the Witchiness, although a large part of the story, is presented largely as incidental. (Debbie Reynolds!!) It’s fun and a wonderful show to share with younger children.

Once Upon a Time

Watching the evolution of The Evil Queen into a powerful and angry creature and then turning vulnerable on a dime is a heart-breaking, albeit exaggerated, testimony to the potential price of vengeful magic. With the line between villains and heroes always blurred, Once Upon a Time delivers textured, multi-layered character development and brings the power of magic deftly into the mundanity of everyday life. With both modern day storylines and flashbacks and crossovers to a fantasy world called “The Enchanted Forest,” this show deals with magic in a very balanced fashion and still brings plenty of action and adventure.

This is way before the time of some of you, but when my bus got me home just before 3:00 PM, my objective was to cry and plead hard enough that my mother would let me go visit my neighbors, Vickie and Kim, for an hour or so. This would let me watch the last part of Dark Shadows, then go home and start work. Their mother would let them watch the show and mine was having none of that nonsense. Barnabas Collins was the horrifying scourge of kids of my generation and Angelique Bouchard was who we all wanted to be. Like Endora from Bewitched, Angelique was an empowered Witch who took no crap off of anyone, least of all the terrifying vampire, Barnabas Collins. This gothic soap opera held us all entranced despite its low budget and melodramatic writing.

Both the US and UK versions of Being Human are very worthy watches. In each version, a ghost, a werewolf, and a vampire are roommates and from that point forward, especially after the first season, the stories have little to do with one another. The characters do not even have the same name. In the US version, a recurring character named Donna is a strong Witch who has lived since the American Witch trials. She does not hesitate to work on the dark side and is very matter of fact about her magic.

Like Once Upon a Time, Merlin works to show the vulnerability and character development that led the resident Witch, Morgana, from dutiful and doting ward to a raging, vengeful ball of anger hellbent on killing Arthur. The show is suitable for a family audience, although some of the stories may be too complex for younger viewers. This version of the Arthurian legend takes tremendous and welcome poetic license with classic characters and story lines and shows them from a new perspective.

Honorable mention goes to True Blood which brought us the bad ass Witch, Marney, and Game of Thrones, which has Milesandre. I did not include Game of Thrones because in reality, George RR Martin has gone on record as saying that although Milesandre does command magical powers (she gave birth to a demon smoke baby that killed a king and then buggered right off), she is actually intended to represent the Roman Catholic Church, so it hardly seemed appropriate, even though the night is dark and full of terrors, yo.

I would like to recommend this movie which although was a full theatrical release, is not widely known. It’s nothing that will blow Cannes or Sundance apart, but it is respectful and entertaining.

Share your favorite Witchy TV shows and mini-series in the discussion section below!