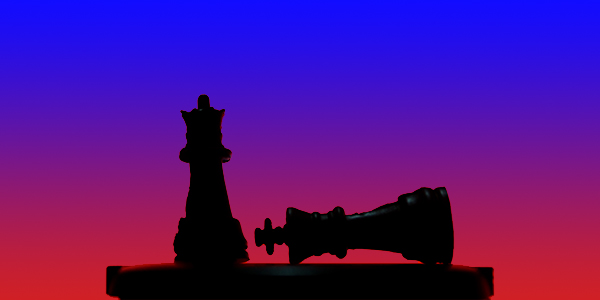 Someone once pointed out that Ginger Rogers did everything Fred Astaire did, except backwards and in heels. Some who are not as old as paint like I am may not know who either of those people are, so here is video evidence of what they did. Things don’t really get nuts in the clip until around 3:00 minutes in. Feel free to jump ahead.

Because of the era to which I was born and how I was raised, I still struggle with male-female dynamic. Some women of my generation were brought up in a home environment where a strong woman ruled and they have no problem stepping into a dominant role. My mother and my father both suffered from their own forms of mental illness when I was growing up. My father was raised as an only child in a home that was emotionally and physically abusive to the extreme. Horrific neglect was a daily occurrence from the earliest time of his life, as well as the outright abuse. He was more “normal,” than he had any right to be, but the psychological damage was profound. Because of experiences he endured as a child, when anything was pressed against his face, he had unbearable panic attacks. He spent most of his life working on cars in a paint and body shop in Owensboro, Kentucky and because of his problems, he was unable to wear a mask when he painted the cars using lead base paint. After years of breathing in the fumes, by the time he died at the age of fifty-one from a massive heart attack resulting in a ventricular rupture, he was, to use medical terms, crazier than a shithouse rat.

My mother had her own set of paranoias and struggles, but other than a crippling case of hypochondria, her greatest mental and emotional challenges came from a tumor that began growing in her brain at some point in her life. Her doctors could not speculate on how long it had been there, but when she was in her fifties and it was at last diagnosed and removed, it was approximately the size of a lemon. The pressure it put on her brain caused some bizarre behavior.

In my book, Leaving Kentucky in the Broad Daylight, I detail what it was like to grow up in a tremendously dysfunctional, volatile, and eccentric family. I wrote the book as a catharsis to cleanse and forgive that part of my life. For many years, I could only remember three or four specific moments from my childhood until a friend insisted that I had more in there and encouraged me to find it. I went deep and found more and more memories. A journey through photographs and discussions with my mother’s relatives helped me to feel more whole again and the result of that quest was Leaving Kentucky.

Many have asked why I have not yet written the book I Aim to Misbehave, the sequel to Leaving Kentucky that tells the rest of my story. Yes, it is quite interesting. I traveled all over the world, married the same man twice, then married a different one, birthed and raised six children, had incredible religious experiences, and accomplished some pretty cool things. The reason why is that I have not yet found my way through that next part of my life and I still have things to reconcile before I can reclaim that time with honor.

I married at sixteen and moved, as so many of us do, from one dysfunctional, broken situation into another. My first escaped his own horrible childhood and brought with him just as much emotional baggage as I did and we quickly set about duplicating the damaging lives we’d left behind in our childhood homes. He was abusive. I was submissive. I thought it was a good situation because it seemed better than the home I had left to be with him. I literally did not know it was supposed to be different than it was and as a result, our three sons were brought up in an environment that was almost as toxic as the ones Paul and I had survived.

When Paul and I divorced the first time after fourteen years of marriage, I had a mental break that lasted a little over a year. During that time, I gave birth to a beautiful daughter. I did not come out into the light of day until she was eight months old and I got a job at Edwards Air Base in California. As a single mom of four children, I had to work three jobs to not make enough money to get by. I did not pursue legal counsel as I should have in the divorce, mostly because my husband told me how it was going to be and I accepted what he said. Despite the hardships, I found my own strength during this time and began to stand on my own.

A year later, Paul came back from a two year tour in Japan and he and I remarried right away. Within a week of him being back, even before we remarried, I knew it was a horrible mistake. I felt the power bleeding out of me moment by moment and my fragile, newborn independence crumbled. I had a list of “this will never happen again” deal-breakers and he agreed to all of them and immediately began to tick his way down the list. I fussed, but acquiesced.

In early 1996, I was completely blindsided when he returned from a temporary duty assignment (he was an Air Force instructor) and informed me that he was in love with someone else, that we were divorcing, and it was not negotiable. I attempted to negotiate and failed miserably. If anything, I was more devastated than the first time because I now had proof that my trust was so carelessly placed. Again, he told me how it would be. I resisted and fared a little better in the second divorce and somehow became the villain in the situation. I have stopped trying to figure out that mystery.

In late 1996, through a strange set of coincidences, I met my current husband, and I literally fell instantly in love with him. He thought I was the most amazing woman he had ever met, but he was not attracted to me physically. He was very clear that no matter how much he cared for me, I was too old, too fat, and had too many children to be a romantic interest for him. He was right. When we married, he was 21 and I was 36.

Despite this, we eventually married and had two sons together. This year, we will celebrate our eighteenth wedding anniversary if all goes well. My husband is very alpha male and is quite a dominant personality. Unlike my first husband, Eric and I share the same spiritual path, even though our own personal practices are slightly different, and that has been a tremendous blessing. Our parenting styles and ways of engaging the world are vastly different and that has been the genesis of some challenging conflicts. Eric is also extremely direct about his thoughts and that has also been a challenge for me since not all of his thoughts about me are particular flattering. In the interest of discretion, I will leave it at that, but suffice it to say that despite an over love that is tremendous and respectful, he goes through periods of utter disgust and frustration over what he views as my lack of success and progress.

Through all of these years, I have often felt the call to step up, to be more, to do more, to lead, to actualize, to level up into the next dimension of power, to become what I am meant to be. Each and every time I reverted to submissiveness.

“I will do better.” “I am sorry.” (and my inner dialogue was worse)

A glance through all of the journals that are on this site, which do not include the more than a decade of online journaling before that I have not even linked up, it is easy to find the places where I was empowered, stood in my own strength, and was ready to embrace my destiny. It is also easy to find all the dark times when my pride, my self-esteem, and my heart were scattered in tiny shards on the ground. I never found all those pieces to put back together again, but I am great with spackle and a putty knife.

This year, as I have mentioned before, Eric and I chose not to “plant” anything to harvest in the Fall and instead see what seeds the Goddess chose to blow into our fields. We took a leap of faith and instead of attempting to craft our own improvements as we have done every year for the past almost twenty years, we opened to what we needed to know and do. Throughout the year, every ritual, every touch point, has included our own form of opening further to the process. It has been absolutely brutal and the frank, stark realities I have had to see took no precautions to my protect my sensibilities.

There were times I was pretty sure this year was going to kill me, but this year, the Harvest brought me exactly what I needed: the shove into becoming who I was meant to be.

I definitely fought it. I prayed. I cried. I begged. I bargained. 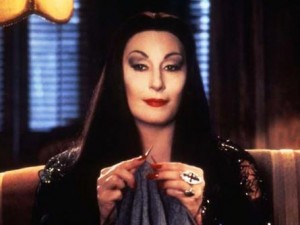 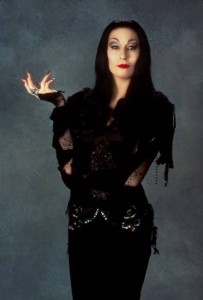 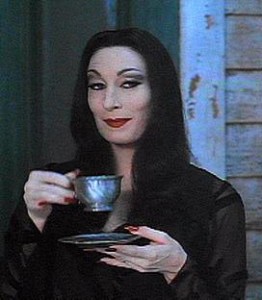 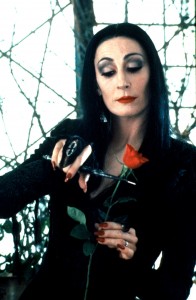 It is noteworthy that She never once looked at me like this: 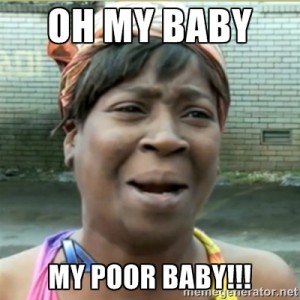 In short, the Goddess is fully done with my bullshit excuses and victimization. My harvest is that there are no more gimmies and there is no more time.

This year, I had to deal with the Good Ol’ Boys Club too many times, in too many ways, wearing too many (particularly poor) disguises. I love men. I love men unbelievably and profoundly. I have five sons and two grandsons, so I am surrounded by males. The dynamic I create with them is for ME to police, not them. I helped to create it and now I have to change it.

My spiritual circle and support network are almost exclusively female, which I did not expect since I often do not get along well with women. Instead, I was led to strong, wise, fearless Valkyries who have my back in all things, but aren’t afraid to call bullshit when they see it. I was sent a full staff of teachers and mentors to guide me.

Each time I was confronted with dismissive attitudes and condescension because I am a woman, because I am not youthful anymore, or because I am not the physical archetype society now appreciates, I buckled. I turned the experience inward and accepted that it was because I was not worthy of respect. It was because I was a failure. It was because I was weak. Over and over I have allowed myself to be put into a corner and dismissed, despite the growing rage inside me. I did so because since birth, I was taught, primarily by men, but also by a few women here and there, that my needs are not as important as theirs and my presence is secondary to theirs. I embraced this and cried and ducked away in shame.

This is no longer acceptable to me. 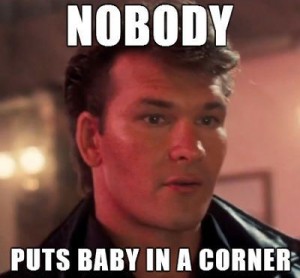 Except I am not a baby and I do not need Johnny to save me or legitimize me anymore.

I love a true King and always will, but never again a doormat and never again the lesser. 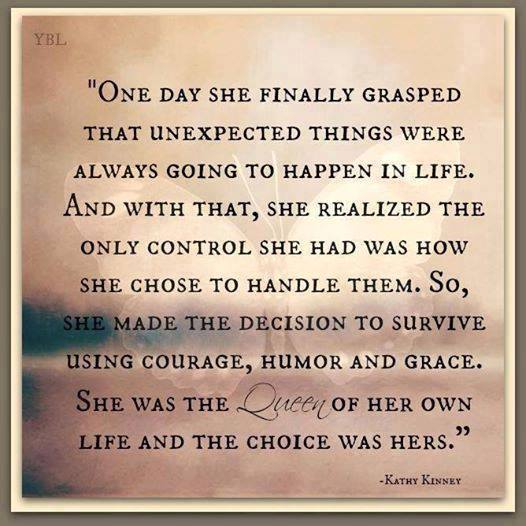 One thought on “Time to Dance Forward”