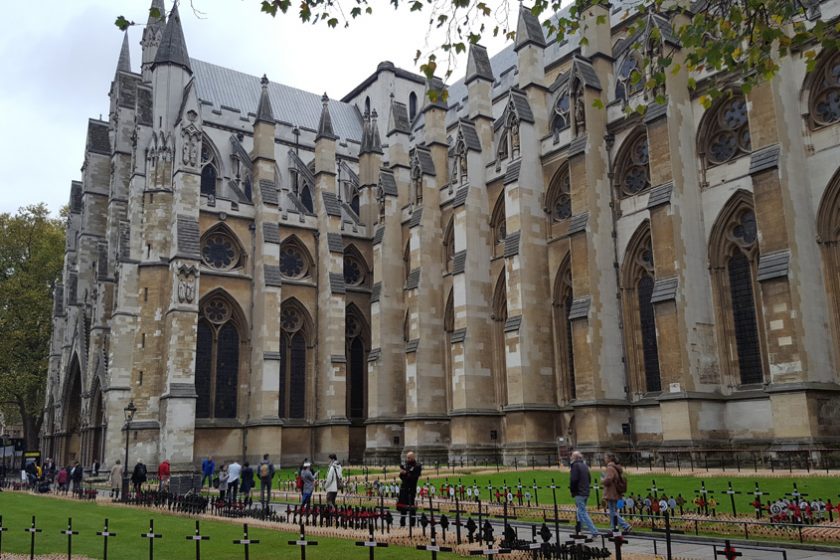 There are no words to describe not only the beauty but the feel of Westminster Abbey. Built by Edward the Confessor in 1042 and expanded or changed by many monarchs since then, the air is thick with history and meaning. It is also quite haunted.  All except two (Edward V and Edward VIII who were never crowned) of the reigning monarchs of Britain since William the Conqueror (1066) were crowned there. William and Kate were married there. Nearly royal who ever died is buried there. (Queen Victoria and Prince Albert are the Royal Mausoleum at Frogmore and Princess Diana is buried at her family’s estate in Northampton) It is a buffet of historical wowza.

Unfortunately, just as there are no words, there are also almost no photos because no photography is allowed inside the Abbey. It was, however, a delight for someone like me who is obsessed with the British monarchy. To see the tomb of Anne Neville, the wife of Richard III, and to see the tombs of Edward IV and Elizabeth Woodville side-by-side, their death masks in full view, was amazing.

As I was leaving, I once again encountered that bizarre confusion of employees. I handed in my audio guide and mentioned to the girl there that I was surprised that I had not seen the tombs of Elizabeth I and Mary Queen of Scots. Were they not open for public viewing?

The girl looked puzzled. Who was I looking for? The tomb of…?

*Stare.*  “No…. Elizabeth II is not dead. She is your reigning monarch and as far as I know, very much alive. Elizabeth I, daughter of Henry VIII…?”

Sure enough, there lay the two sisters who detested one another so profoundly. Bloody Mary side-by-side with Elizabeth I and across the aisle from them their cousin, Mary Queen of Scots. I could barely breathe.

It’s no wonder I completely missed that section. I was in the chapel before them when I heard, “Pssst… PSSSST” and looked out to see Eric motioning urgently to me. Being Eric, he had talked one of the Bishops of the Abbey into letting him go into the private chapel area of Edward the Confessor, normally off limits. We waited around twenty minutes for the area to clear and the Bishop pulled aside the barrier to let Eric enter. I asked if I could accompany him or if I should wait and applaud the fact that he got to go in and the man rolled his eyes and stood aside so I could go in as well.

The ancient air was thick, intense, and the hairs were up on my arms. My skin tingled. The area was not huge, but it was fine and looked so… undisturbed by the intervening many hundreds of years and rebuilding and rearranging.

Another thing that struck me that I can’t get out of my head and I wish I could show you in photos is how in every chapel, the stone steps leading up to it dip down in the middle from the bazillion footfalls over them.

I walked where Elizabeth of York walked. I touched the same walls Henry VI or Margaret of Anjou may have brushed against. It may not seem like much, but for me, it took my breath away.

If you want to know more about Westminster Abbey or see some of the inside views, here is a link.

Here are some photos of the exterior, as well as images of the train and tube stations:

Videos of the London Underground (The Tube). Street performers are in the tunnels that go to the trains and subways, as well as on the subways themselves. They play and then pass the ‘nation sack.

In the station itself:

The tube gets even more crowded than this. It is not for people who are uncomfortable in close quarters or in crowds. You will get up close and intimate with all kinds of people: