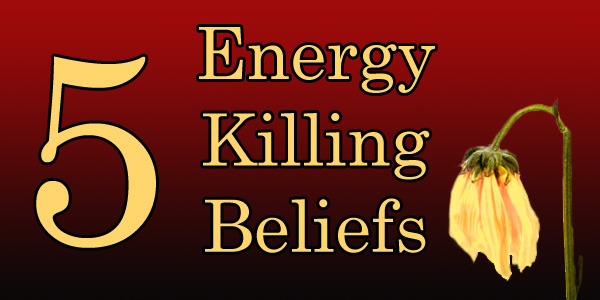 Essential disclaimer: Some Pagans do not actively work magic, so this particular blog references those who do. My assessment of common mistakes energy-wielding Pagans make is not an attack on people who practice magic differently than I do. Goddess bless ya if it works for you. I openly and immediately concede that some of you may have had different experiences. This is, instead, an observation of what I have personally screwed up in over thirty years of practice, as well as what I observe in other Pagans who are challenged by the limitations of their own erroneous beliefs. Will any of these five issues cause Armageddon or create irreversible damage? Likely not. The worst that will probably happen is that self-imposed limitations will minimize your magical flow. Oh how I wish someone had told me these things when I was just a little Witch rather than having to find them out on my own. So here we go:

1. “My Exhaustion Makes Me A Better Pagan/Person”

Sadly, some people base their self worth on their ability and willingness to work hard beyond their own physical capabilities. I have heard many respected Pagan leaders bemoan how exhausted they are, not just after a tough festival, but every time I talk to them. “We ran so much energy through the circle that I had to sleep for the entire week afterward.” “There is just too much to do! I work from before sun up until the wee hours of the morning and still don’t get it all done! I am so exhausted!” They wear their energy depletion like a merit badge. Any Pagan or any person who places themselves in a life of eternal exhaustion is doing no one a service, least of all the people who rely on them. Magic can be hard and exhausting work, true. Leading a group is exhausting. Running a festival is exhausting. Hosting a ritual is exhausting. This being considered, depleting yourself with five meetings a week on top of the demands of life is harmful if you find you are physically compromised on an ongoing basis. Demanding more from yourself from time to time is necessary for growth and is rewarding on a personal level. Doing so all the time, however, is dangerously close to embracing martyrdom, which is an act of ego, not of service. Courting exhaustion on a regular basis keeps you from doing anything, least of all magic, particularly well. Self-care is vital and saying, “No, I cannot do that. The time and energy are just not there” is wise and discerning. Remember that the safety briefing an airline provides before take off tells us to put the oxygen mask on ourselves before assisting children or other adults, which is a very telling directive. Care for yourself first so that you are available to help others in the capacity the Goddess demands. When I hear, “But this is what the Goddess has led me to do!” I respectfully disagree. The Goddess will certainly  lead us into a ministry and will sometimes demand more from us than we feel we can give, but it is almost always the ego of humans that causes us to avoid necessary self-care.

The opposite of #1, magical laziness, is also a problem. I know Pagans who perform spell work then sit back and wait for the Miracle Truck to drive up to their front door with a Miracle Delivery with their name all over it. Does that ever happen? Sure it does! Accomplishing impossible tasks with magical backing is the very nature of what we do and The Universe sometimes works overtime to come through for us with miracles aplenty. Should we rely on that exclusively? Absolutely not. “As above, so below” and “The Lord helps those who help themselves” are ideas that still apply. In magic, we call it “working in accord,” which means “have faith, but row for the shore.” If you perform magic to get a good job, the spell work will open doors and create opportunities for that to happen. You still have to polish up your resume, fill out applications, and do the leg work to create inroads for the magic to get to you. Magic is a wonderful boost to mundane efforts, but it is not an excuse to sit back and do nothing. If magic took care of all of us without the need for our own energy investment, there would not be as many broke ass Pagans as you see in the world.

3. “My Group and I Practice Magic the Right Way”

My own group, CUSP, moves the circle energy counterclockwise because that is how energy in the world naturally moves. The earth moves counterclockwise around the sun. The earth spins counterclockwise on its axis. Electrons move in a counterclockwise motion around the nucleus of an atom. Clockwise, in fact, relates to movement of the sun dial, which is a reflection of the natural movement of the sun and is therefore, backwards. It works for us and has for eighteen years now. I can just as easily enjoy a ritual hosted by another group where the energy runs clockwise. When we first began practicing using counterclockwise energy, the traditionalists found out and lost their minds. I received countless angry, insulting emails about the havoc I was courting from people who I did not know and had never been at any of our rituals. “You’re teaching newbies to do this and it’s like giving a baby a gun!” “This is like driving on the wrong side of the road!” When I pressed the issue and asked exactly what big bad was going to happen, no one could give me an answer. They would even admit they had no idea what would happen, only that they knew it would be really bad. Since then, we have enjoyed hundreds of high powered, successful, counterclockwise circles with no ill effects at all. Magic is fluid, forgiving, and not nearly as terrifying as many would make it out to be. Limiting your own beliefs because someone told you a practice was wrong without thinking it through for yourself deliberately compromises your openness to new ideas and ways to increase your magical flow. Stay open. Stay wise. The Universe is huge and magical and filled with energy that wants to take on its new form through your actions. Work in concert with the Universe and avoid the trap of someone else’s dogmatic, limiting beliefs. Always respect what others do and honor that they believe a thing to be so, then find out what works for you and what doesn’t.

Religion, magic, and the metaphysical world are vast and I believe them to be the final frontier of knowledge. Little of what we practice is provable or measurable by current scientific methods. Too many Pagans clutch tightly to what science can currently back up as the only universal truths and will only accept the truth of another if the person providing it can cite precedence and references. How arrogant and limiting is it to believe that science has already reached its pinnacle of knowledge and that what a person says they have experienced is false unless they can cite scientific validation? Science cannot prove why we dream. Does that mean we do not dream? Science cannot prove there are ghosts and spirits among us. Does that mean they are not there? The concept of a higher being is foreign to science, so should we not honor Gods and Goddesses? Can we somehow prove a negative now? Sad as it is, I have had Pagans say to me, “Astrology is bullshit. Science has tried and failed for centuries to back it up.” “Jesus wasn’t a real person, so why do these idiots believe in him?” The objective fact is that when it comes to subjective belief that is not provable, the person questioning the belief does not know and therefore, has no right to say it is not so. None of us where there to know if Jesus was a real person, an amalgam of several people, or a fabricated legend, so who are we do scorn those who do believe? None of us knows definitively about an afterlife, but does that mean those who believe in reincarnation or Heaven are wrong?  Is it really so challenging to allow people to believe differently than we do without it being an affront to what we ourselves believe? For some, it is and that inability to remain open to the possibilities that exist in the Universe limits their receptivity to the mysteries of magic. There was a time, in our lifetime, in fact, when science considered herb lore to be ridiculous and unsubstantiated. Now, doctors agree that drinking cranberry juice can relieve cystitis and chewing white willow bark eases a headache because it is a key component of aspirin. We are well out of the Dark Ages, but the Arrogant Ages still hold vicious sway. Don’t be that guy. Open your mind to the wonders, even the unproven ones, of the magical world.

5. “I Only Use Magic In Emergencies”

This is an archaic throwback belief to the idea that using magic is something shameful that should be hidden or that the flow of magical energy is finite and must be strictly metered out. In reality, this belief is the equivalent to being a “Sunday Christian.” To reference point #1 in this post, physical energy is finite, but magical energy is infinite. There is no magical sheriff to tell you that you’ve punched up your entire magical ticket for the month and need to back off. There is no magical rationing. It helps if we stop thinking in terms of using magic and think more about being magic. Our bodies take in air, water, and nourishment from the outside world and transmute it into sustenance for our life force. We are not using life, we are life. Similarly, we take in magical energy from the world around us, including our Deities, and use it to sustain our spirits. This benefits not only us, but also elevates the macrocosm of humans by raising the magical energy level through us all. We then have sufficient magical energy to pass on to others as needed and to receive back again when our reserves are low due to biorhythms, fatigue, or illness. The contents of a cup that does not both receive and pour out become stagnant. I believe that a synergistic effect of magical practice creates additional magical energy that flows through the Universe, greater than the sum of the parts of our own contribution and that of Nature. With the abundance of magical energy available to us, there is no restriction on how or how often we direct our magical energy toward specific outcomes. When you fully participate in the magical life, every day becomes magical. Every moment is pregnant with possibility and insurmountable obstacles become challenges and opportunities. We open to the will of the Universe and use our energy in a wise and harmonious way that creates a better life for ourselves and others. If you save your magical energy for true emergencies, it is akin to holding your breath until you pass out from lack of oxygen and start breathing again. Magic is a muscle that we must flex often and well to fully understand and appreciate it.